The proper approach to building a fantasy baseball team is hugely determined by league settings. If you have been reading Fantasy Pro’s for any time at all, you have heard our experts hammer that point home repeatedly. There are so many different ways to play the game, and each way should result in different player rankings and priorities.

In this post, we will talk about some of the things that come into play when you are playing in a nonstandard categories league. First, we should define what a standard league is. If you accept the defaults on most websites your ten categories will look like this:

If that is your situation, you can probably get away with using any expert provided categories/rotisserie rankings. However, oftentimes that is not your situation, so we’ll go through some different scenarios you may find yourself in and give you some tips.

This is the most common nonstandard batting category, so we have already talked a lot about it. Check out these posts for some great analysis on how to change your strategy in an OBP league:

Those posts assume you are in a league that replaces batting average with on-base percentage. What about the case where you have both?

In those cases, you have an opportunity to essentially kill two birds with one stone. Batting average and on-base percentage are highly correlated. Here is a scatter plot to show this relationship. Each dot represents a player that had 300 or more plate appearances in each of the last three seasons, their position on the x-axis is their batting average, and their position on the y-axis is their on-base percentage. 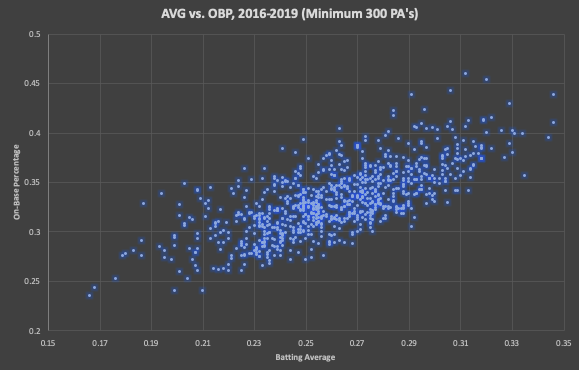 This is a positive correlation. As batting average rises, so does on-base percentage. This is not a surprise to anybody, but I don’t think many fantasy players use this knowledge to their advantage.

If you are in a league with both categories, most players you draft that will help you in batting average will also help you in on-base percentage. This is a reason to prioritize these players. Charlie Blackmon, for example, becomes extra valuable in a 6×6 league like this, where his high batting average manifests in a high on-base percentage as well, doubling the impact of that skill.

I think these categories are somewhat rare, but I have seen them used in some leagues. The calculation for slugging percentage is simply total bases divided by at-bats, so we can lump these two categories together.

If you are adding one of these categories onto a league that already has batting average or on-base percentage, you are going to want to prioritize extra-base hits.

One way to get a good handle on this is to find out what players had the biggest discrepancies between batting average and slugging percentage. I took the final 2019 statistics and filtered out all hitters with less than 500 plate appearances. After that, I found each player’s percentile rank in both batting average and slugging percentage and found the biggest differences between those numbers.

Here are your top 10 players that were much better in slugging percentage than batting average:

Pretty obvious results here. The players that see their value skyrocket when slugging percentage is a category are the home run or bust free swingers. I heard you begging for more correlation scatter plots through your screen, so here’s another one: 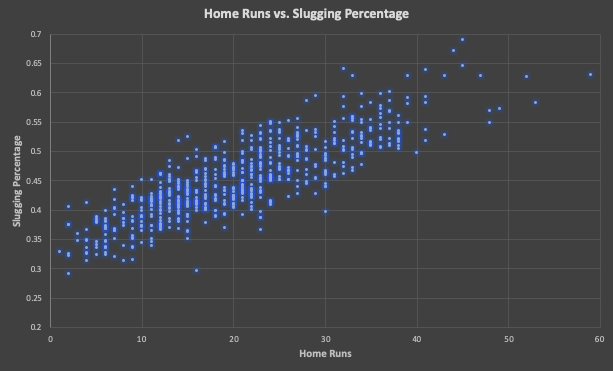 Home runs and slugging percentage – high positive correlation. No kidding, right? A home run is four times as many total bases as a single, so you can really make up for a lot of outs made if you are hitting a bunch of homers.

The guys you want to prioritize less when total bases or slugging percentage is introduced is the speedy slap hitters like David Fletcher, Hanser Alberto, and the rest of those types. These guys are useful in a league where batting average is 20% of the offensive categories, but they will be total craters in your slugging percentage category.

This is a negative for a lot of the steals specialists, as guys that steal a ton of bases often have lower slugging percentages. You cannot steal a base after you hit a homer, and the vast majority of stolen bases come from guys occupying first base, so extra-base hits naturally correlate negatively with steals (as one goes up, the other goes down). I’ll spare you the scatter plot on this one.

This category is all about volume, which means it brings streaming and lineup position into play. You cannot get a hit if you do not get a plate appearance, and there is no way to have a negative hit – so your main goal in this situation is to rack up the plate appearances. Leadoff men become more valuable, and streaming players that have a full schedule for a given week/time period is also going to help you in this category.

The same scenario comes into play that we talked about with average and OBP leagues. Hits is obviously highly correlated with batting average, so if your league uses both of these categories, prioritizing high batting average players makes a ton of sense because you can get ahead in two categories at the same time.

This is a pretty common category to add on to a standard league, thus we have already talked about. Check out this post to get you set for your saves+holds league draft.

If your league features saves and holds as separate categories, my advice would be to let the rest of the field draft for holds and find yours in the final rounds or waiver wire.

In 2019, there were 1,180 total saves in Major League Baseball (49% of total games). There were more than twice that many holds (2,438). There was more than one hold per game on average. While there were some relievers that predictably posted a bunch of holds (Ryan Pressly tied for the league lead with 31), there were a ton of players that were big-time positives in the category that you could have added on the waiver wire. Do not pay for holds.

We have also already written about quality starts a bit here recently, so check this article out if you are interested in a deeper and different perspective.

Quality Starts (6 or more innings pitched to start the game with 3 or less earned runs allowed) have been harder and harder to come by in recent years. Last year, there were just 1,795 quality starts thrown. Every game played gives you two opportunities for a quality start, so that math (162 * 30 * 2) gives you 9,720 total opportunities. That means starting pitchers earned a quality start only 18.4% of the time. Of course, this was widely spread out, as the league leader (Gerrit Cole) posted a quality start in 79% of his starts. There were just 42 pitchers who met the requirements in more than half of their starts.

So what is the secret sauce to getting quality starts? The answer is to draft efficient pitchers who don’t allow a lot of runs. It’s that simple, my work here is done.

But seriously, check out the top 20 pitchers in quality start rate:

There are not a lot of young guys on this list. The only pitchers that are relatively new to the league on the list are Shane Bieber, Frankie Montas, Luis Castillo, Mike Soroka, and Jack Flaherty. Quality starts are an old man’s game. If you are looking for quality starts after the top tiers of pitchers are gone, you are probably going to have to sacrifice some strikeouts to get it. The only pitchers that are cheap in 2020 on this list are Ryu, Montas, Keuchel, Urena, and Duffy – only Montas of those names is likely to give you an above-average strikeout rate.

Give your old, crafty, pitch-to-contact starters a slight boost in your rankings if you are needing quality starts.

The K/9 category plays wildly different than just having total strikeouts. It places lower importance on volume, meaning you can get just three or four innings from a pitcher and they could still boost your team in this category, while they would be pretty unlikely to do boost your team in a straight strikeouts category. How does this change your draft strategy? Well, it makes relievers a bit more valuable, and it also makes some of the high walk rate pitchers much more valuable (see: Robbie Ray, Dinelson Lamet, Eduardo Rodriguez).

Strikeouts Per Nine is actually one of the more predictable categories out there in terms of the statistics “stickiness” from year-to-year. Most pitchers have consistent K/9 totals across their careers, while that is almost never true with wins, quality starts, and total strikeouts.

A few things to note:

The best way to prepare for a nonstandard league is to make your own rankings using projections. You can check out our projections page here. I encourage any serious fantasy baseballer to be comfortable using Microsoft Excel. You can download our projections into Excel using the download button in the top right, create z-scores or percentile ranks for the categories your league uses, and generate your own rankings in just a matter of minutes. I am more than willing to help anybody out who wants to learn, just hit me up on Twitter!