From 2017-2018, Scooter Gennett led MLB second basemen in RBIs, ranked fifth in home runs, and ranked third in wRC+. Gennett owned a career 99 OPS+ heading into 2017, and his breakout was one of few bright spots for a Reds team that averaged 69 wins over its previous three seasons.

While Gennett’s power stats were impressive, his 2018 peripheral numbers — which included baseball’s highest predictive stat differentials in batting average (BA – xBA) and wOBA (wOBA – xwOBA) — revealed a hitter who was overperforming and likely benefitting from playing half his games in one of baseball’s most home run-friendly parks.

Last July, the Reds traded Gennett to the Giants, who released him a month later. He finished the year batting .226 with just two home runs and 11 RBIs in 139 games. Although Gennett’s 2019 season was incomplete and marred by injuries, his statistical regression was predictable, and at least one of the reasons Cincinnati was willing to part with the one-time All-Star at the low cost of cash and a “player to be named later.”

This Gennett case study underscores how misleading traditional statistics can be to the untrained eye, and it should function as a cautionary tale for fantasy managers interested in drafting one-year wonders with eye-popping numbers.

For this primer, we’ll be using a collection of Statcast’s expected statistic leaderboards to examine six fantasy stars who outperformed their skillsets in 2019. Some, such as Yuli Gurriel, carry major red flags, while others, such as Jack Flaherty, flash only minor causes for concern.

It’s important to remember that these are simply candidates based on statistical analyses, not necessarily players guaranteed to fall short of their 2020 projections.

Tatis was a consensus top-three prospect entering the 2019 campaign, and he was the frontrunner for NL Rookie of the Year before a back injury abruptly ended his season in August. Prior to the injury, he was a fantasy standout, leading shortstops with a .317 average and ranking among the top seven in home runs and stolen bases at the position despite missing all of May. He also ranked tied for second among shortstops with Xander Bogaerts in offensive runs above average during this span.

His well-rounded stat portfolio notwithstanding, there’s reason to think Tatis could regress in 2020. For starters, he led MLB with a .410 BABIP when his season ended, and he had the highest quality of contact differential among qualified hitters, both of which indicate he was one of the luckiest players in baseball.

While Tatis still profiles as one of the better offensive shortstops in the game, he’s going to face pitchers who have access to more advanced scouting reports than they did in year one. Even if he stays healthy, I don’t value Tatis as a top-20 fantasy draft pick this season.

Anderson led baseball with a .335 batting average in 2019, thanks in large part to his .399 BABIP, which ranked second in the majors by season’s end. His expected batting average (.294) tied for 16th in baseball, and his 88.3 MPH average exit velocity ranked in the 39th percentile among qualified hitters.

Some analysts may attribute Anderson’s good fortune on balls in play to his speed, but he ranked outside baseball’s top-10 runners in both sprint speed and home plate to first base time last season, which tells me he was very lucky in addition to being pretty good.

While Anderson certainly improved last year, he was a career .258 hitter entering the season, and he doesn’t seem likely to sustain his extraordinary 2019 performance in upcoming seasons.

All “bang the trashcan” jokes aside, there’s a lot of evidence to support potential Gurriel regression in 2020.

He had the fourth-highest contact quality differential in 2019, finishing the season with a .364 wOBA despite a .322 expected wOBA. He also ranked among baseball’s bottom 20 hitters in barrel% and solid contact% while placing in the 54th percentile in exit velocity.

Although he improved his launch angle in 2019, the 35-year-old Gurriel doesn’t project as a markedly different hitter from the one he’s been in his four MLB seasons. 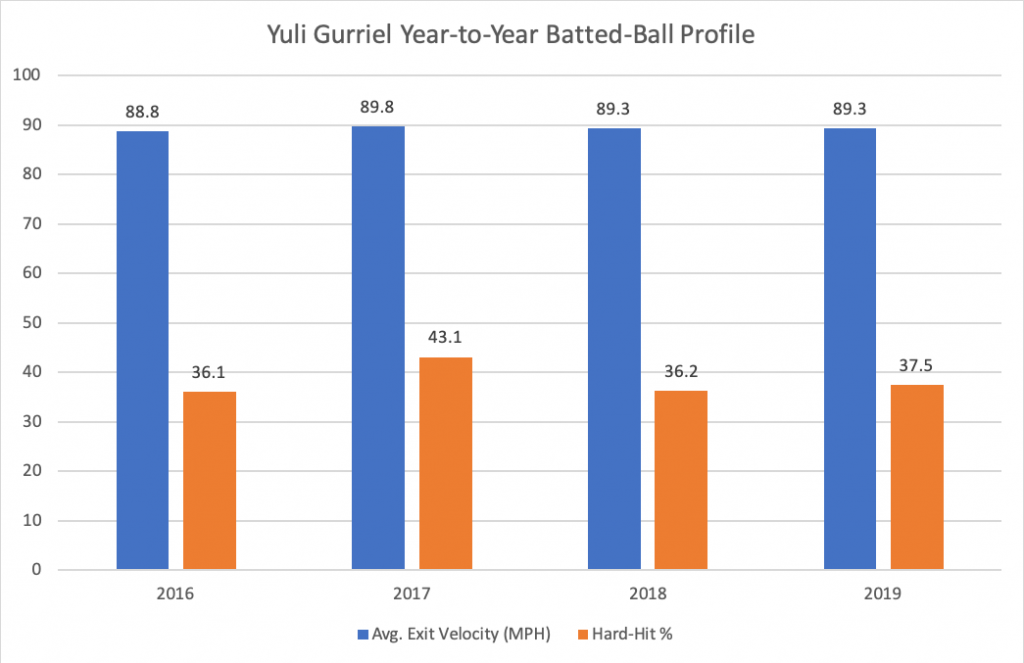 The Astros should score a lot of runs again in 2020, but I wouldn’t expect a repeat performance from Gurriel, who benefitted from a bouncier baseball (and potentially other outside forces) in 2019.

His ridiculously low .254 wOBA against was 24 points lower than his .278 xwOBA against, a differential that ranked among the top 10 in baseball. He also allowed a bottom-three batting average on contact (BACON) despite an expected BACON that landed outside baseball’s top 20 in the category.

Don’t overreact here — Flaherty’s still one of baseball’s top pitchers — but I wouldn’t necessarily expect him to become a top-five starter in 2020.

Bieber is a hot pick in 2020 fantasy drafts, and he’s currently getting selected as the consensus No. 8 starting pitcher.

But my suggestion is to proceed with caution, as Bieber had the second-highest average exit velocity against among qualified pitchers in 2019. He also had a bottom-10 barrel% against, and he initiated weak contact less often than any other pitcher in baseball last season.

“It’s Maddux-like movement with more velocity.”@Braves legend John Smoltz sees talent in Mike Soroka that would have fit in any generation. pic.twitter.com/rQodBr4aNK

In his age-21 season, Soroka made his first All-Star team and became the Braves’ clear No. 1 starter, finishing 2019 with a staff-leading 2.68 ERA (third in the NL). He was also runner-up to Pete Alonso for NL Rookie of the Year and ranked sixth in NL Cy Young Award voting.

As a native Atlantan, I’ve grown to appreciate what Soroka does well — control the zone and initiate soft contact — although I think his fantasy ascension has a been a bit overstated.