If you want to dive deeper into fantasy football, be sure to check out our award-winning slate of Fantasy Football Tools as you prepare for your draft this season. From our Cheat Sheet Creator – which allows you to combine rankings from 100+ experts into one cheat sheet – to our Draft Assistant – that optimizes your picks with expert advice – we’ve got you covered this fantasy football draft season.

At about this time every year, it’s a good idea to start practicing drafts using our mock draft simulator. The best thing about it is how quick it is: you can get a full draft done in less than 10 minutes!

It allows you to quickly start to assess strategy based on where you pick in the draft, and it helps you to see how your team would end up doing based on our projections. Also, because it’s based on up-to-date ADP, you can get a feel for who is rising and falling throughout the offseason.

Below, you can find the full results and reasoning for a draft that I just did for in a 12-team league with half-PPR scoring. I randomized my draft pick and got the 11th overall selection.

2.02 Nick Chubb (RB – CLE)
I am super high on Chubb this year, and I seriously considered taking him with my first pick. I think he has the best chance of leading the league in rushing this year, and I am excited to see what he can do behind his much-improved offensive line.

3.11 Leonard Fournette (RB – JAC)
This was a tough decision, as I like a few of the players that were recommended instead. It came down to positional scarcity in the end, and I went with the running back. I am much lower on the backs that were likely to be available to me following this pick. I figured I would take the opportunity to snag myself a back who is guaranteed to see high volume. Regardless of talent, with the work Fournette is likely to see every week, RB15 is right at his floor. 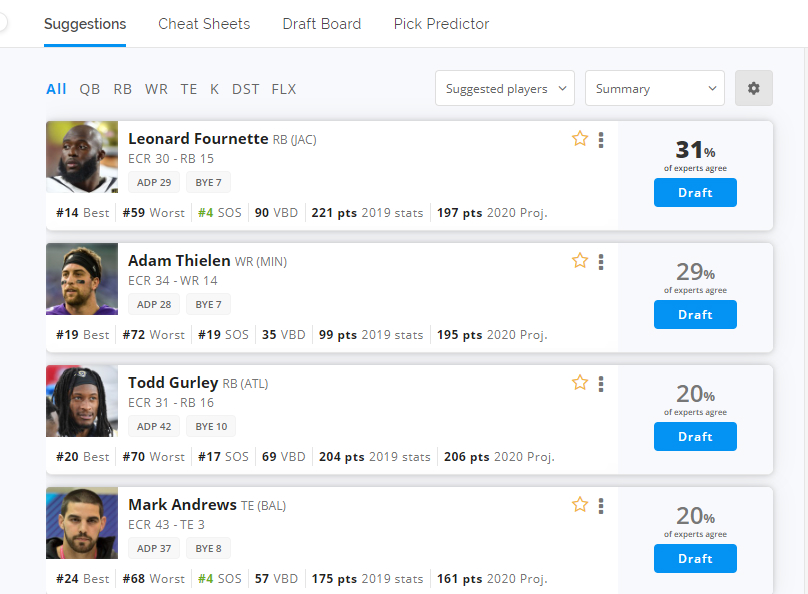 4.02 Adam Thielen (WR – MIN)
Boy, was I happy to see Thielen waiting for me here. People are relatively low on him after an injury-plagued season, but don’t forget how consistent he was before 2019. He may well take a little step back from an efficiency standpoint after Stefon Diggs’ departure, but the increase in targets he will see will surely offset that.

5.11 D.J. Chark (WR – JAC)
In many ways, this was the hardest decision of the draft. I just couldn’t decide between James Conner or  Chark. What ended up making the decision easier was my favourite new addition to the simulator for this year. On the left of the screenshot, you will see that each player has a predictor %. This is the chance that the player gets drafted before your next pick, and it’s great for helping you with tough decisions. I went with Chark here because it was less likely that I would be able to get him in the sixth. 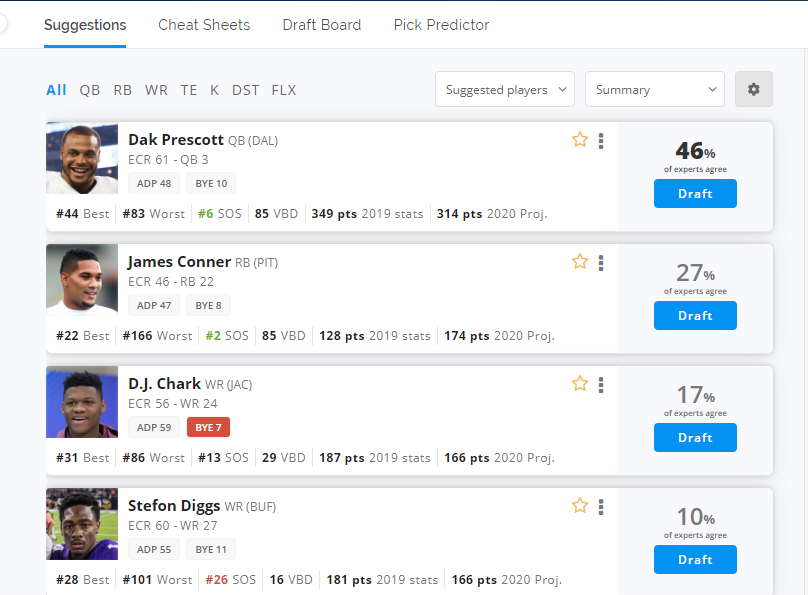 6.02 James Conner (RB – PIT)
I was rewarded for following the predictor% in the fifth. I have no idea why Conner is still available this late in drafts. Yes, his injuries and the Steelers’ continued investment of draft capital at the position are cause for concern. However, this is a talented starting back in an explosive offense on a team that’s unlikely to see too many negative game scripts. If you see him this late in your drafts, don’t let that value slip through your fingers.

7.11 Marvin Jones (WR – DET)
At this point in the draft, I’m looking to stock my team with consistent starters. Marvin Jones embodies consistency. He finished as the WR27 on the season last year, and that was despite missing three games and playing with (at times) sub-par quarterbacks. Taking him as the 37th receiver is excellent value. His ADP is currently unbelievably low (108), but this will surely rise as we move towards the season.

8.02 Sony Michel (RB – NE)
Another player who has a relatively safe floor. Michel should see the volume to return touchdown-dependent RB2 value every week.

9.11 Tyler Higbee (TE – LAR)
Here again, I used the predictor% to help inform my decision. Around this range is where you typically see the starting-caliber players disappear. As such, it’s as good a time as any to start thinking about addressing tight end and quarterback (if the value isn’t there, don’t force it though!).

Thankfully, both Higbee and Tom Brady are players I have been targeting in drafts, but I couldn’t decide which player to take first. I saw that Brady was much more likely to be there the next time I picked, so I took Higbee.

10.02 Tom Brady (QB – TB)
He has been put in a position to succeed this year, and I am not one to bet against Brady. He finished in the top 12 at the position last year, and his situation is significantly improved. Taking him as the 11th QB off the board feels like a great piece of business.

11.11 Preston Williams (WR – MIA)
At this point I felt great about where my roster was at, so I decided to take some shots at some high-risk longshots. Preston Williams should again see the volume to justify drafting him over the other receivers in this range. I feel great about him in the 11th — this could be a league-winner.

12.02 Matthew Stafford (QB – DET)
I like Brady, but I feel a lot better about this team knowing that I have him insured. Matthew Stafford feels primed for a big season, and he could far surpass where he is currently being drafted.

13.11 Pittsburgh Steelers
14.02 Justin Tucker (K – BAL)
Getting my guys the round before people start looking

15.11 Justin Jackson (RB – LAC)
Another dart throw at a potential league-winner. He won’t be around this late when we are drafting in August, based on the stories coming out of LA.

After you finish your draft, you’ll be given a grade based on how you did, and you’ll find out your projected standings. I was given an A- (which felt harsh!) and projected to come 4th. Below you can see the full draft board. The whole process took, at most, 20 minutes. 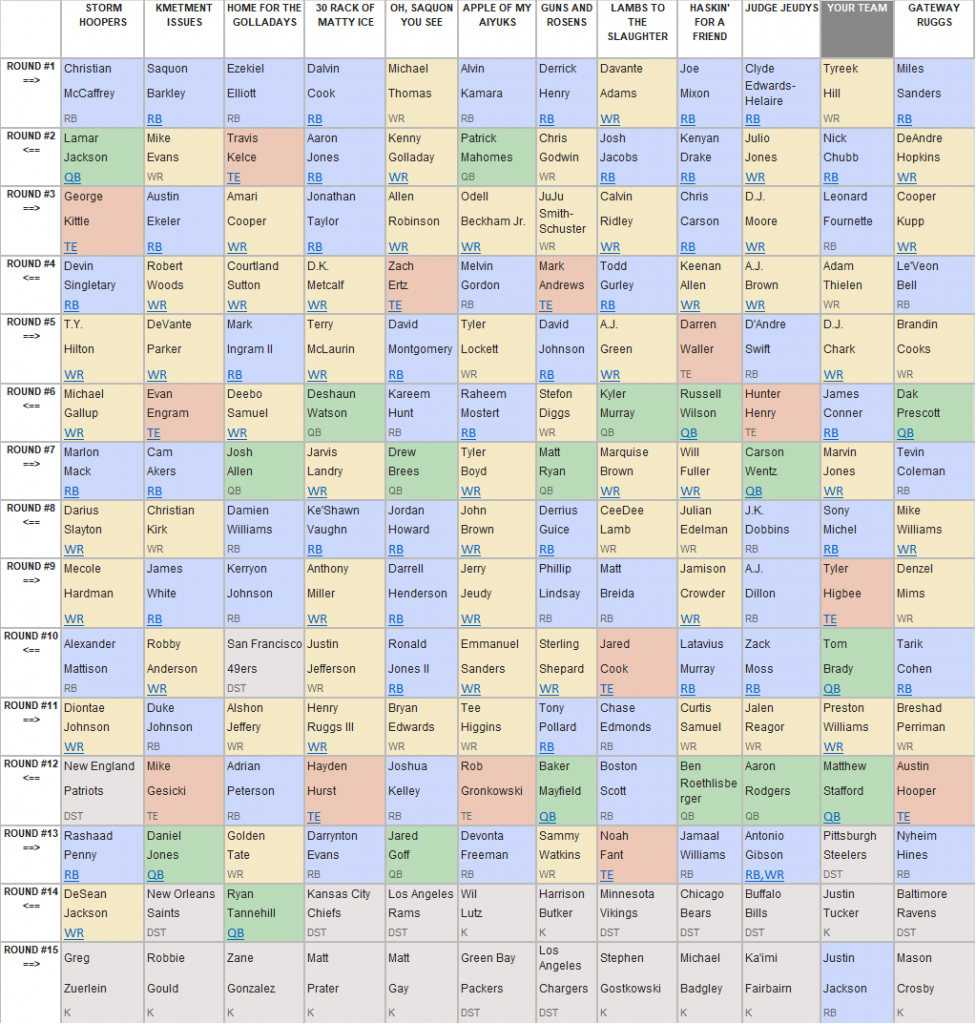 Ethan Summers is a featured writer at FantasyPros. For more from Ethan, check out his archive and follow him @AllSummersLong_.