Playing at a similar level as last year, Kenny Golladay could push for a top-five WR finish.

There was once a time in fantasy football where wide receivers were mere afterthoughts; NFL running backs commonly saw 300 touches yearly and rushing production was incredible. However, as the NFL became increasingly more pass-heavy with the incorporation of analytics, offense-friendly rules, and greater utilization of three-WR sets, many fantasy leagues adopted PPR and a third starting WR slot setting to drive greater importance in the WR role.

However, the proliferation of three-WR sets in the NFL, and these fantasy rule changes led to an influx of WR3s – boom-bust options that are seemingly indistinguishable from one another. Trying to guess when to start Will Fuller, Marquise Brown, or Marvin Jones last year in a given week was infuriating.

These types of receivers display immense potential but include significant weekly volatility that could easily lose you a match-up. Identifying the perfect harmony between upside and a reliable floor is critical as WR production becomes more fragmented.

In this third installment of the four-part 2020 fantasy football consistency series, you probably know the deal. If not, check out the previously written quarterback and running back articles.

The visualization below displays FantasyPros’ top 24 WRs per average draft position (ADP) in half PPR leagues, as of July 9. According to PFF data, on average, these 24 WRs generated 12.9 PPG – in which they had at least one opportunity, defined as targets plus rushes – with a standard deviation (SD) of 8.1 points, equaling a 62.8% coefficient of variation (CV). Generally, the lower the CV, the safer the player is given his average production. Considering these data, the average top 24 WR should score between 4.8 and 21.0 PPG, on average, each week.

Among the top 24 drafted WRs in 2020, only 25% clearly seem to be elite producers with below-average weekly risk, while three others (Cooper Kupp, Allen Robinson, and Keenan Allen) reside on the fringe. However, when considering draft capital, there are some very appealing players outside of the green region. In fact, pairing players like Michael Thomas with Mike Evans or Calvin Ridley may be hugely successful and desirable depending on your strategy and risk aversion. 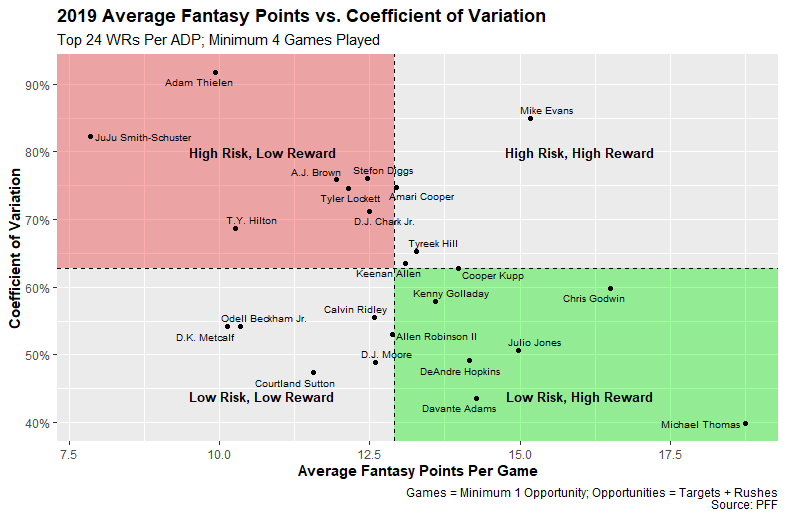 Kenny Golladay (13.6 PPG, 7.9 SD, 57.9% CV)
Kenny Golladay remains overlooked by the fantasy community, with an ADP at the tail end of the second round or mid-third, depending on league size. Golladay performed well despite Matthew Stafford starting just eight games last year, while on pace for the most efficient season in his career. If Stafford can stay healthy (he played in all 16 games every year prior since 2011), while playing at a similar level as last year, Golladay could absolutely go bonkers and push for a top-five WR finish. This is well worth his current cost.

D.J. Moore (12.6 PPG, 6.2 SD, 48.9% CV)
As one of my favorite targets this season and being a fellow University of Maryland alumnus, D.J. Moore had to be on this list. Despite playing on a Panthers offense last year with Kyle Allen at the helm, Moore proved why he was a first-round pick in 2018. Before leaving Week 16 with an injury after just one yard on two targets, Moore was on pace for over 1,340 yards at an 8.9 yards-per-target clip. Now he has a seemingly legit QB in Teddy Bridgewater. Moore is one of my favorite targets in the third round currently in 12-team leagues, and easily a top choice in the fourth if he falls.

A.J. Brown (11.9 PPG, 9.1 SD, 75.9% CV)
I’ll preface this by saying A.J. Brown may turn out to be the next best WR in the league following his superbly efficient rookie season. However, that’s the issue. His (and Ryan Tannehill’s) efficiency was off the charts, scoring nine touchdowns on just 55 touches and 87 opportunities through the regular season. In fact, across his last five games (including the playoffs), Brown produced just 10 catches for 222 yards (124 of those coming in one game on four catches) on 20 targets. Simply put, Brown has immense upside and talent, but also great risk if whenever the Titans go into their desired run-heavy mode. At an ADP residing in the third or fourth, I’m avoiding Brown unless I already have stability at the WR position and can shoot for the moon with his upside.

T.Y. Hilton (10.3 PPG, 7.0 SD, 68.7% CV)
T.Y. Hilton has been so good seemingly every year since he entered the league in 2012. However, an injury-plagued 2019 season in which he underperformed despite a solid touchdown-per-game rate, not to mention another new QB – who happens to be aging (and declining) – has me avoiding Hilton in most drafts. Although he isn’t too expensive with an ADP in the fifth-to-sixth rounds, I find myself targeting higher upside players like D.J. Chark, Terry McLaurin, James Conner, or David Johnson ahead of him.