A sixty game season leaves just 12 starts per pitcher in a five-man rotation. Some teams may use their best pitchers a bit more frequently in 2020, but we are unlikely to see any pitcher make even 15 starts this year.

With this little data, we are going to see wide variances in statistical outputs this year, especially on the starting pitching side. One lousy start is going to have a significant impact on a season-long line.

To get a feel for this, let’s take a look at Clayton Kershaw’s 2019 season and randomly pick a 12-start sample out of the data. Here’s what it looks like:

Now let’s imagine that just one of these good starts went poorly for Kershaw. Let’s imagine that the Pirates really touched up Kershaw in that third start (a Pirate fan can dream, can’t he?). Changing that line to 3 IP, 6 H, 7 ER, 2 BB results in Kershaw having a 3.72 ERA and a 1.16 WHIP over that same 12-game stretch. Those are huge differences: his ERA bloats by 0.87 runs and his WHIP jumps 0.11 points. He would fall several spots in the player rankings because of that appearance if he only started those 12 games last year.

What this means for 2020 is that we might want to prioritize the sturdier, reliable pitchers when picking our staff. Just a few really bad starts could kill your chances of winning a rotisserie title in 2020.

I went back and retrieved a data set of every MLB pitcher’s starts over the last three seasons. Just for fun, let’s look at the 10 worst starts from the previous three years in terms of earned runs allowed: 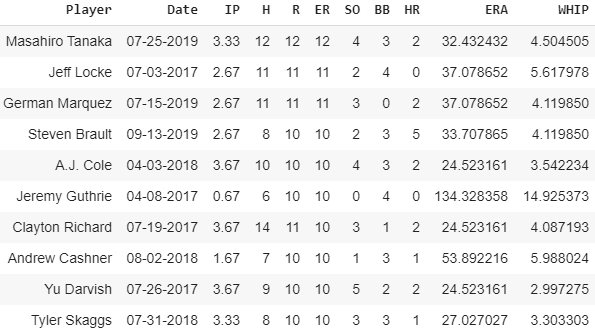 Anyways, I wanted to find which pitchers had the highest percentage of their starts meeting certain criteria. I tried this a few different ways, filtering by the ERA and WHIP column for each start.

These aren’t necessarily good starts, but they also are not complete killers. An example start that would meet this criterion would be six innings, three earned runs, and seven hits and walks.  That’s a quality start, but it isn’t really going to improve your overall season numbers in most cases.

I checked every starting pitcher with 30 or more starts over the last three seasons, and I got the percentage of times they posted starts at least this good in the past three years. Here are the leaders: 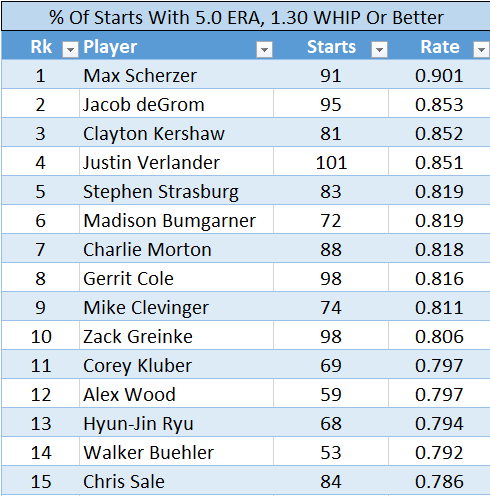 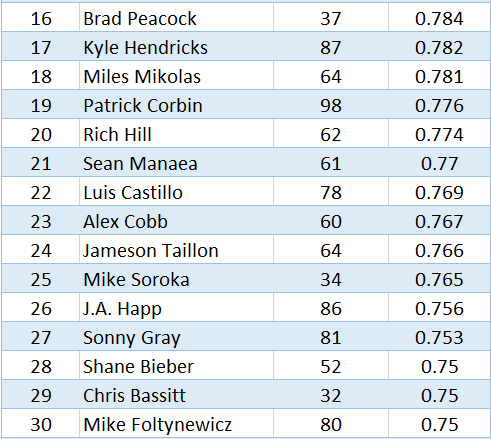 One thing almost all of these pitchers have in common is their ability to limit walks. The league average for walks per nine innings has been about 3.1 over the last three seasons. Of these top 30, only Mike Clevinger, Brad Peacock, Luis Castillo, Sonny Gray, and Mike Foltynewicz had BB/9 rates above that average. The average BB/9 rate for the thirty pitches above is 2.3, and that’s a pretty elite walk rate.

A start with an ERA of six or more with a WHIP above two is a really disastrous outing, so we are opening up the study a bit here. Here are the top-30 performers under these parameters: 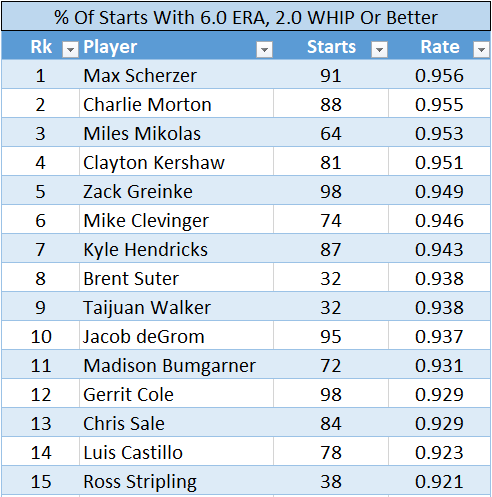 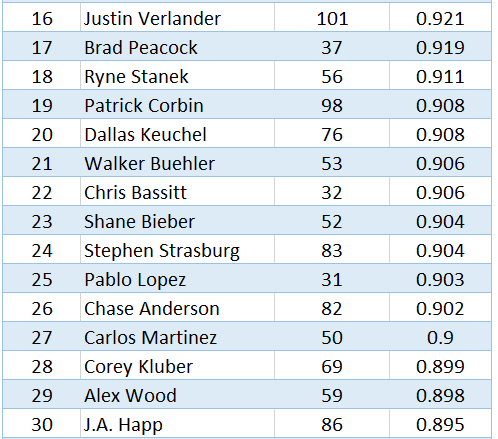 Max Scherzer has only had three starts in the last three seasons with an ERA above six and a WHIP above two.

Charlie Morton shows up at No. 2 a bit surprisingly, and Miles Mikolas had a strong showing as well at 95%. We have a lot more of the usual suspects with some small-sample wonders mixed in like Brent Suter and Taijuan Walker.

These are pretty elite starts and will help your season-long ratios substantially. Here are the leaders: 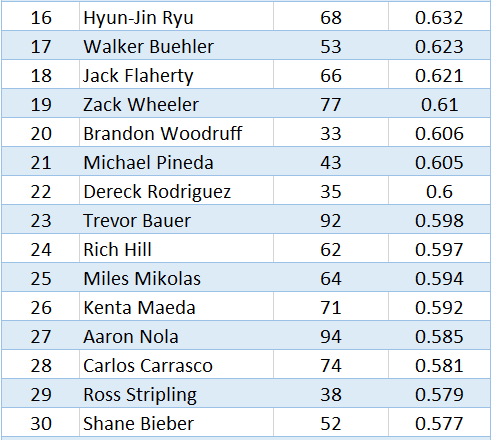 This list is peppered with Cy Young-caliber pitchers with some surprises mixed in. I would not have expected Kyle Hendricks to make the top 15, and Michael Pineda, Dereck Rodriguez, Miles Mikolas, and Ross Stripling were pretty surprising names to see as well.

There are some pretty cheap pitchers that have been very good at not hurting fantasy teams for years now. Guys like Hendricks, Bassitt, Greinke, and Bumgarner are good examples of pitchers that may be worth much more than their draft price this year, as you can be confident that they won’t completely tank your stats with one bad start.

As a general rule, pitchers who limit their walks are much safer. This isn’t big news or anything, but this study is just another solid piece of evidence to back it up. Walk rate might be a useful statistic to use as a tie-breaker if you can’t decide between two guys — because those walks are going to be magnified this year as each start has a much more significant impact on your season line.