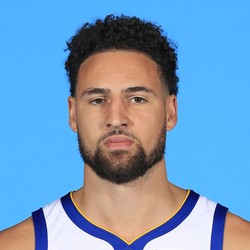 Klay Thompson (Achilles) 'not a 100 percent healthy yet'

Thompson sustained a torn ACL in his left knee in Game 6 of the 2019 NBA Finals. When Mychal Thompson was asked if Klay was fully healthy, "I don’t know. He’s walking around fine. Who knows if he’s cleared to play. He has to get that clearance from his doctors and the Warriors. They haven’t talked about that yet." Thompson signed a five-year, $190 million contract this off-season, but has already been ruled out for the remainder of 2019-2020 campaign, even if the NBA (suspended due to the coronavirus) resumes.