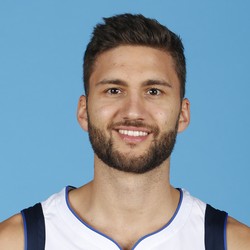 Maxi Kleber scored five points on 2-8 shooting from the field (1-4 3PT), with seven boards, four assists, one steal, five blocks and no turnovers across 39 minutes in a big 127-123 overtime win against Zion Williamson and the Pelicans.

Kleber got the start over Seth Curry tonight for Dallas. That’s a welcome sign for Kleber owners, as he’s been coming off the bench most games that Kristaps Porzingis has been in the starting lineup. Kleber lived up to expectations in this one, blocking five shots in a huge nationally televised game against a very solid New Orleans team. Over his last five games, Kleber is averaging 7.2 rebounds, 2.6 blocks, and less than one turnover per game. He’s efficiently producing across a multitude of categories for fantasy owners, and needs to be owned in all leagues at this point, especially if he continues to start alongside Porzingis.