Since I began my career as a fantasy baseball analyst, I’ve been begging anyone who would listen to use my cheat code. I call it the Marmol Strategy. I know it has been working for others as well as it has for me because of the tweets I get in October with screenshots of their championship teams. Then every spring, the begging is reciprocated with my Twitter blowing up with questions about when it will come out this year. A handful of my annual articles get that question once or twice a year, but when it happens dozens of times, and several times from the same people, that is a good sign.

It works because nine dominant relievers equate to three elite starting pitchers. Essentially, you are trading all of your late picks for three second round picks to grab Chris Sale, Jacob deGrom, Justin Verlander. Don’t believe me? Check out the results from the roster I drafted below. Good luck getting a 100 in Draft Wizard without cheating or using the Marmol Strategy (same thing). This is a no-brainer, and only more so when you consider the fact that by letting starting pitchers bypass you for the first 10 rounds, you have compiled the top lineup in the league. 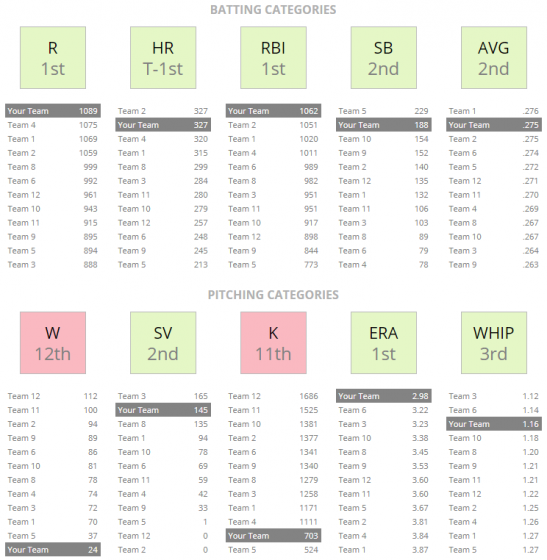 Does my league allow for it?
Many don’t so be careful. If your league requires you to start 4 starting pitchers, steer clear. If you are in a points league, the Marmol strategy is the worst idea ever. If your league requires an innings minimum, you might be able to skirt by if two of Josh James, Alex Reyes, Freddy Peralta and Matthew Strahm make the rotation. Chances are, you’ll need to add one or two of Rich Hill, Charlie Morton or Yu Darvish to make it work. You still don’t draft a pitcher until round 10, but you have to downgrade from second-tier closers like Corey Knebel and Jose Alvarado to these starters. You’ll drop to 3rd or 4th in saves while gaining in no other categories. Oh well, you still win, but it will be closer. Your goal is to pick starting pitchers who will own tremendous ratios but have innings concerns. Others who fit the bill are Ross Stripling, Kenta Maeda, Hyun-Jin Ryu, Tyler Glasnow and Jesus Luzardo. If your league used quality starts instead of wins and/or OBP instead of BA, nothing changes. If your league adds holds and OPS, even better. All leagues are different, so if you have other questions, don’t hesitate to tweet me @bobbyfantasypro.

Who should I target?
I’ll show you by simulating a standard ESPN league draft using our draft simulation software. I’ll take all of the roster settings including 9 flex-pitchers and 0 SPs. In the first 9 or 11 rounds, you should begin to fill out your offense. The ordering doesn’t especially matter, as I can guarantee you will have the best offense in your league by using all this draft capital on hitting while the rest of your league mixes for a few pitchers. I’ll begin by targeting high average guys who rack up steals since those are more difficult to get than power in the middle of drafts.

Now keep in mind, this was for an ESPN league where you do not have to fill a single SP spot. In Yahoo leagues, you’ll need two. In that case, draft Seth Lugo and Diego Castillo. Both qualify as starting pitchers but are filthy relievers who are only a minor downgrade from Chad Green and Trevor May. If you need more, Ryne Stanek, one of the Dodgers’ Ryu/Maeda/Stripling grouping and one of the Cardinals’ Reyes/Gant/Poncedeleon will do the trick.

This isn’t the best strategy this year…
Marmol Strategy adherents are all gasping right now and ready to throw me off a cliff. “You mean I read this whole article for nothing!?” I didn’t say you won’t win with it. I said it isn’t the best. I’ve found one just for this season that I prefer more. With that said, if you start with picks 1 and 2, you’ve got to take Mike Trout or Mookie Betts then roll with the Marmol, or if you can’t land (spoiler) Max Scherzer or Chris Sale with picks 3-12 in the first round, grab yourself a hitter (ahem, Ronald Acuna) and win with the Marmol. If you can start with an ultra-ace though, your odds of winning, if you can believe it, are even higher. I’ll tell you more next week in my annual Pocket Rockets Strategy article.