Kyle Hendricks has had two rough starts to commence 2019.

Welcome to week two of regression! It is way too early in the season to take victory laps from the first week’s calls, but it appears Yu Darvish’s 42% hard-hit rate allowed over his first two starts is due to a drop in velocity. Collin McHugh was selected over Brad Peacock to remain in the Astros’ rotation after a few scintillating performances, and he’s already registered a 3.1 pVal with his slider.

For week two, it’s all about velocity, baby. Specifically, pitcher velocity and hitter exit velocity. We are still dealing with small sample sizes, but velocity stabilizes relatively quickly and is an early indicator of how we can predict rest-of-season performances.

Dan Vogelbach (1B – SEA)
The once-prized prospect, then post-hype sleeper, then bust, and now post-bust sleeper is crushing the ball out of the gate. Voglebach is leading baseball in average exit velocity at 99.2 miles per hour through 29 plate appearances. Of course, this is a small sample size. Cody Bellinger is averaging 94.6 mph, but his owner in your league who already knows the Dodgers’ star is off to a flying start. This average exit velocity (and max velocity of 108.2 mph) has resulted in five homers for Vogelbach. I probably also don’t have to tell you that his 55.6% HR/FB rate is unsustainable, but the fact that he is seeing the ball so well and finally delivering on his power pedigree gives us hope that this is his breakout season.

A bunch of moving parts in the Mariners’ lineup have steadied in Vogelbach’s favor, as he has settled in as the DH. Edwin Encarnacion has played first base over the last three games after taking two games off due to a minor hand injury. Before we get super excited, we have to realize that he hits righties much better than lefties, making him the positive side of a platoon. Unfortunately, Jay Bruce also hits righties better. Mitch Haniger, Domingo Santana, and Mallex Smith are also all talented outfielders who need consistent playing time. In short, Vogelbach will need to keep hitting to stay in the lineup. The jury’s still out, but positive regression is upon him.

Matthew Boyd (SP – DET)
Oh Boyd, yet another Tigers’ pitcher that we have had trouble trusting. Don’t look now, but he is second in K-BB% behind Mike Clevinger, who is now out six-to-eight weeks with upper back tightness). K-BB rate is a great predictive stat to forecast dominance (strikeouts) and some of WHIP (walks). Boyd’s 39.6% is elite through two starts — Justin Verlander led baseball with a 30.4% rate last year. Nobody was sure if striking out 10 Blue Jays in his first start was a big deal, but after tallying another 13 against the Yankees, it is time to hop on board.

Hard to quantify, but still helpful, is that Boyd had a transformative offseason in which he got leaner and took his training a bit more seriously. While I am not a “best shape of his life” truther, this is a positive sign. As a result, there seems to have been a drastic change in pitch mix. His fastball usage is up to 48.6% (38% in 2018), and his slider usage is up five percent. The offsetting changes are to his sinker and changeup, respectively. His slider’s pVal was much better than his changeup last year, so this change is a good thing. Boyd’s fastball has typically hurt him more than helped him in years past, but there are reports that he is sequencing better and has refined his delivery to include slightly more deception. As a result of this deception and tunneling, his whiff rate on his fastball, slider, and curveball have all significantly increased.

Boyd pitches in the AL Central, meaning he is worth picking up just based on pitching in that light-hitting division. Add him in 12-team leagues and deeper, and potentially even 10-team leagues.

Brian Dozier (2B – WAS)
I had a healthy discussion with fellow FantasyPros’ writer Max Freeze (@FreezeStats) and Fantasy Sports Degens’ KC Bubba (@bdentrek) on what to do with Dozier. I ultimately concluded that his exit velocity is a strong indicator regarding the status of his knee, which plagued him in the second half last year. Well, we have bad news. His exit velocity is an appalling 83.4 mph, which ranks in the bottom nine percent of MLB. This is actually not even the worst advanced stat that he has going for him. He hasn’t hit a single line drive so far this year. This is a recipe for having a .121 batting average. Of course, we have to keep in mind that he has just 35 plate appearances, so these stats no doubt carry some noise.

We also have to consider that another hitter lower in the Nationals’ hitters is pushing to take Dozer’s second spot in the order. Victor Robles is on a tear to start the season, hitting .324/.410/.706 from the nine-hole. With Trea Turner out, Robles is making his case to hit higher in the lineup. If Dozier can’t turn it around, he will see a drop in both runs and RBIs as a result of dropping down the order.

Before going completely Debbie Downer on Dozier, let’s keep in mind that he is a notoriously slow starter. His wRC+ by month is as follows, courtesy of FanGraphs:

He clearly heats up as the weather does, which is potentially something you knew before drafting him. However, the low exit velocity and nonexistent line drives trump his historical slow starts. There probably is one owner who still believes in Dozier, so try and find them to get some value before it is June and you’re hoping that his knee is healthy and that he will heat up.

Kyle Hendricks (SP – CHC)
Another week, another Cubs pitcher. Hendricks, with the economics degree from Dartmouth, has always been an analytical and finesse pitcher. He has never thrown hard, and that continues to be the case in 2019. Hendricks has talked about his mechanics being a bit off in a conversation with The Athletic’s Sahadev Sharma, saying that the depth on his fastball and changeup is not where he wants it to be just yet. Hendricks has typically started off slowly, as his career ERA in March/April is 4.21 with a wOBA of .311, whereas his May ERA is 2.92 with a .274 wOBA.

Hendricks has not differentiated his fastball and changeup like he has in the past — the difference in vertical movement between the two pitches is much smaller. 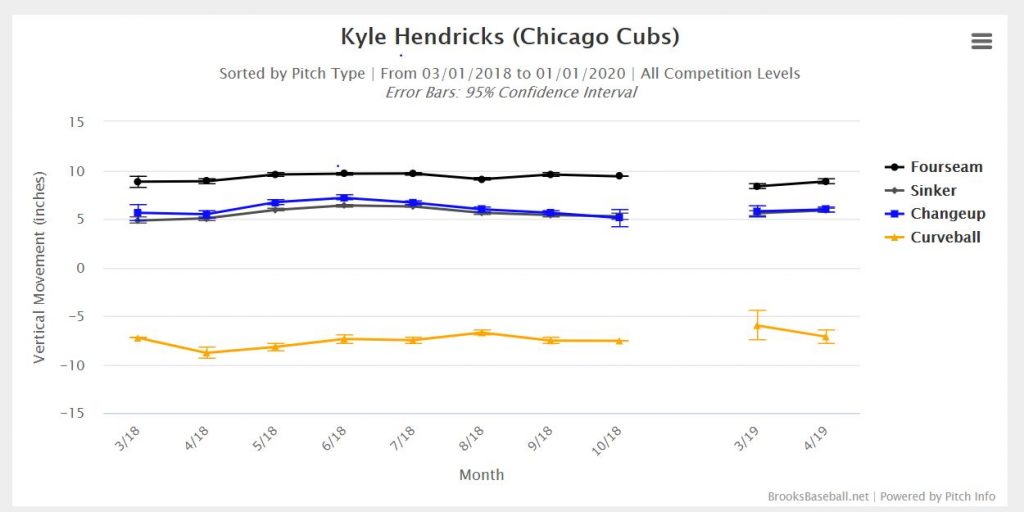 To put it in perspective for 2019, Hendricks has earned a 13.5% whiff rate on his changeup, a seven-percent drop from 2018, per Brooks Baseball. Worse still, his Z-Swing (percent of strikes that are hit) is up nearly 10 percent to 68.1. Hendricks has defied the K-BB rate threshold his entire career, never approaching a K-BB rate above 17 percent. If Hendricks can’t quickly make changes to his mechanics, he will continue to be lit up. Given that he has turned it around before, I expect him to again. Hendricks is a WHIP stabilizer, and his 1.13 career WHIP shows as much.