How well did you do in your 2019 fantasy football draft? How about your favorite expert? Now that the fantasy football regular season is over, we can have a little fun and use wins above replacement (WAR) to find out exactly how everyone did on draft day.

If you’re not already familiar with my work concocting WAR for fantasy football, I suggest you read the methodology to my crazy theory here and take a look at positional trends of the past four years here. WAR is not a predictive tool on the player level any better than points scored or VBD. But it has a couple of major pros:

In this edition, we’ll go position by position through the first five rounds of a 12-team league to reveal which players were worth each selection of each round. The results won’t help predict which player will help you in the upcoming playoffs necessarily, but it will present an opportunity to have a little fun by discovering how successful or horrible your draft choices turned out to be.

Above we have the results of the first five rounds of all positions combined with QBs highlighted in green. As you can see the player with the highest WAR (Christian McCaffrey) is on the left and the rest fall in order moving to the right. One thing that struck me while performing this analysis is that replacement level QB performance dropped mightily from 2018 to 2019 making the position much more valuable than analysts typically suggest. Lamar Jackson led the way and is my pick for the 2019 Fantasy MVP. Let’s take a look at his weekly production with the estimated percent chance he gave his fantasy owners of winning each of their weekly match-ups: 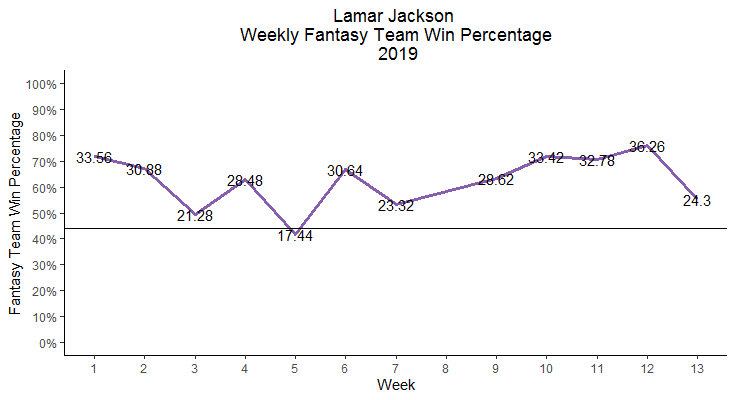 For perspective, the solid line represents the percent chance a fantasy team with a replacement-level QB wins a match-up. Lamar Jackson only dipped his toes in the line once. And as far as fantasy MVP goes, Christian McCaffrey may have the highest WAR by a decisive margin, but owners who drafted Jackson in the early double-digit rounds are reaping massive value vs. McCaffrey who was taken in the top half of Round 1. Jackson’s #2 overall worthy draft spot is even three spots higher than Patrick Mahomes’ of 2018.

Speaking of Mahomes, one of the biggest preseason questions in fantasy was how much regression to expect from the young phenom. After being worthy of the #5 overall pick in 2018, many fantasy experts felt taking Mahomes around the 2-3 turn was acceptable. Well, kudos to whoever called that because Mahomes finished up just around that 2-3 turn at the #23 spot in 2019. Considering their similarity in WAR standing, this information could prove helpful in at least ball-parking Lamar Jackson’s 2020 optimal draft position.

The biggest takeaway I have in the RB section is that zero-RB truthers once again are left standing with their tinfoil hat in hand. Six out of the top-10 fantasy players in the 2019 regular season were running backs and as you’ll soon see the best wide receiver wasn’t worth drafting until the 4th pick of the second round. There is simply no better bet early on in drafts than running backs. With an exact WAR of 2.88, Christian McCaffrey has outdone Todd Gurley’s 2.73 output from 2018. To say McCaffrey has been the Panther’s offensive workhorse is an understatement. Dude couldn’t get more touches if his fantasy owners were calling in the plays themselves. Any fantasy team who wants a chance at winning a title must get their hands on one of the few workhorse pass-catching backs left in the NFL.

Of course, that doesn’t mean taking RBs early is without risk. Le’Veon Bell wasn’t even worthy of the top five rounds (Round 6, pick 6), and even though WAR doesn’t penalize players who missed games, David Johnson barely made the graph himself. After a solid start to the year, his last three active games after being injured provided fantasy team owners an estimated 27%, 25% and 31% respective chance of winning their match-up. Other notable busts not making the graph include Joe Mixon (Round 8, pick 3), Sony Michel, (Round 10, pick 4), Devonta Freeman, (Round 10, pick 10), and sure, why not include Tarik Cohen, (Round 21, pick 5).

This has been a remarkably pathetic year for the WR position as a whole. No receiver, not even Chris Godwin or Michael Thomas, was worthy of a first-round selection. But even though this hasn’t occurred for at least the last four years I’ve researched, don’t think for a second I’m shocked that this occurred. As I pointed out before the season in my positional WAR trends article linked above:

“I’m not sure 2019 will be the year they (WR’s) get completely pushed out of the first round, but there seems to be a growing gap between running back and wide receiver fantasy impact. ”

Some notable busts include Odell Beckham Jr. (Round 15, pick 9), JuJu Smith-Schuster (Round 18, pick 1), and Josh Gordon (Round 23, pick 8). But of all the frustrating receivers this season, none disappointed quite to the degree of Will Fuller. A detailed story as to how Will Fuller broke the soul of each and every one of his fantasy owners is necessary. Let’s start by charting his weekly production: 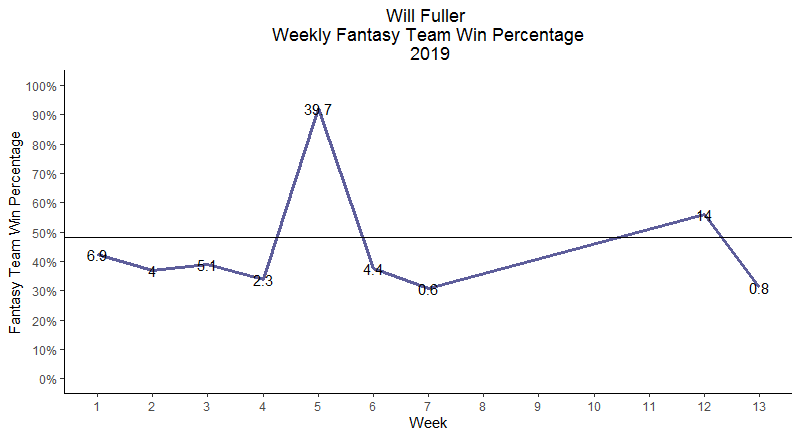 Will Fuller engaged in a particularly conniving strategy to shatter his fantasy owner’s soul into radioactive dust. After a super productive 2018 season while healthy, owners spent the first few weeks of 2019 starting him at the flex position and getting next to nothing in return. After four weeks, owners had no choice but to pull the plug and sit him on the bench. But with the fantasy owner weight off his shoulders, Will Fuller was liberated in Week 5 to produce the literal #1 WR output out of the entire 1,385 WR performances of 2019 (through Week 13). With Fuller basically on every owner’s bench, the chart above reveals that zero percent of Will Fuller fantasy owners had a 90 percent chance of winning in Week 5.

After having no choice but to put Fuller back in the lineup in Week 6, Fuller rewarded his owners with the following performance: 5-44-0 on nine targets.

Look, fantasy owners like me figured Week 6 was going to be a Lucy pulling the football situation, but three drops took it to another level of depressing. What’s worse was that it forced the owner’s hands in throwing him out there again in Week 7, in which he netted an entire one catch for six yards on the first drive of the game while getting injured and destroying the last bit of every last fantasy owner’s soul.

Not that I’m bitter.

As every analyst predicted, Austin “Who?” Hooper finished the 2019 season with the best WAR average as he led all tight ends in average PPG.

Seriously though. For years Austin Hooper has been the first guy fantasy owners see in the “top available” section when their real tight gets hurt or is on bye. If you’ve never thought to yourself: “oh well, I guess I’ll just pick up Austin Hooper“, then you’re probably not putting in enough effort. More often than not, he’s been sitting there waiting to get picked up so he can disappoint you for a solid weekend before packing his bags to return to free agency abyss. Well just look at him now. Our perennial replacement-level tight end has grown into the best tight end in the league in 2019 by almost a full round and nobody even seems to notice. And while he’s been hurt the past three weeks, it looks like he might be ready to roll for the playoffs as the league’s best bet at tight end.

Aside from Hooper, not a lot is super surprising. The “big three” (Kelce, Ertz, Kittle) at least all made it in the top-5 rounds and Hunter Henry and Evan Engram have been productive as anticipated when on the field. It seems that there is at least some consistency as to who the top names of 2020 will be come draft season.

The 2019 New England Patriots were worth the #5 pick of the first round and could be also be argued as the best value of the entire year. They are this year’s 2018 Chicago Bears. A unit so dominant and consistent throughout the year that they are sure to be a centerpiece of fantasy teams for years on end. Just like the 2018 Bears were the new 2017 Jaguars; who were the new 2016 Vikings; who were the new 2015 Denver Broncos; who were… I think you get the gist. If you have New England’s DST this postseason, enjoy it while you can.

If you look super closely at the Kicker WAR graph, you’ll notice that there are actually a few kickers on the list. Butker, Lutz, and Tucker all squeaked their way into earning 5th round draft valuations. It might look bad for the kicker congregation, but it’s better than last year when only Greg Zuerlein earned a top-5 round spot. His draft valuation in 2018 was in the third round and had a similar result in 2017 as well. For that reason, I suggested before the season that drafters ditch what all the analysts say about kickers and move up a few rounds to snag Zuerlein. Despite him not quite making the top-5 rounds, WAR shows his actual landing spot as the first pick of Round 7 validating my advice to swoop in a few rounds before your final pick.

In closing, whether you are gearing up for a playoff run or doing some soul searching as to how your season completely fell apart, take a gander at your team’s results with this comprehensive list of the top-300 WAR chart of 2019:

Jeff Henderson is a featured writer at FantasyPros. For more from Jeff, check out his archive and follow him @statholesports.