Baseball’s Statcast revolution has given us an absurd amount of data to analyze for fantasy purposes. Major League Baseball has made all of the data it collects public; you can go download a file with information about every single pitch thrown last season (732,473 pitches with 89 columns of data for every single one). The data categorizes every batted ball into one of six categories depending on the launch speed and launch angle. These categories are:

Here is a visualization of these six categories directly from baseballsavant.mlb.com:

You could guess that a hitter would have the most success with balls that were classified as a “barrel”, which means the ball was hit at least 98 miles per hour at an angle in that red zone above. I went ahead and calculated the batting average for each hit classification from the 2019 season, and here are the results:

Here is how the home runs broke down last year:

The few home runs from categories four and three were either mislabeled or inside the park homers, so you can see that you are really looking for the barrels when looking for home runs.

So who were the leaders last year in barrel rate? Not a ton of these names will surprise you, but here is everyone with 200+ plate appearances that came in at or above 13%:

You see the league’s biggest (literally) sluggers at the top of the list, with Joey Gallo, Miguel Sano, Aaron Judge, Nelson Cruz, and Gary Sanchez making up the top five. There are a few swing-for-the-fences catchers in there, but largely these are all guys that are well known and will not be super cheap in drafts this year.

One thing most of the players above have in common is a high strikeout rate. This makes intuitive sense, as you have to swing really hard to register a barrel (and probably be sitting on a certain pitch), and that lends itself to more swings and misses. If you play in a category league, you know that guys like Gallo and Sano are not first-round players because they can really hurt your team’s batting average. We can take this one step further by incorporating strikeout rate to identify some potential guys who can hit a lot of home runs this year without burying you in batting average.

To do this, I took the percentile rank  — this means that when you see a 90% in a percentile column, that hitter is better than 90% of the rest of the hitters in the data in that category — for each of barrel rate and strikeout rate, and then averaged them. 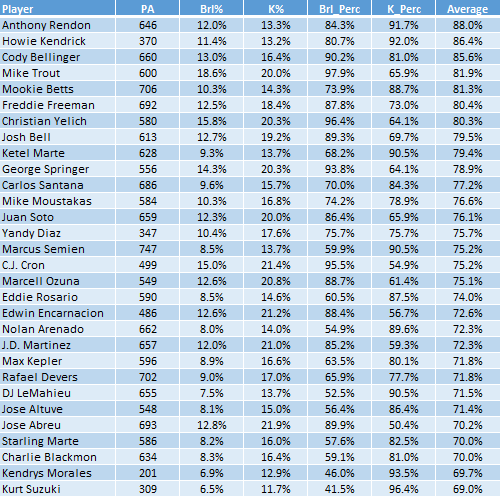 The goal of hitting is to hit the ball very hard as often as possible; these hitters were the best at doing that last year. Some fantasy-relevant notables from the data:

Some potential red flags from this data:

Much analysis can be done with the Statcast data, so I encourage everybody to give it a look as we draw closer and closer to spring training. As always, if you want the full data or just have general questions or comments, you can find me on Twitter @JonPGH! Thanks for reading.