If you haven’t tried out FantasyPros’ Mock Draft Simulator, I strongly urge you to do so. There is still optimism that the NFL season will proceed, and with the sheer upheaval we’ve faced in 2020, many of us may be a bit rusty in our football preparation. This simulator will get you back on track for the latest trends in ADP so you’re ready for some drafts.

You can configure the simulator for re-draft or dynasty, all players or rookies-only, and you can customize the number of roster positions. You can also set the number of teams in each draft, whether it is linear or snake, and you can either choose where you pick (if that has been determined in your league) or receive a random position for each draft.

Once you make a selection, the rest of the picks are made immediately, so each draft can go swiftly, although you are not on the clock for your picks (by default). I will analyze a recent draft I concluded, describe the analysis the site gave me, and offer my reasoning for my picks.

Picks That I Liked

Alvin Kamara and Miles Sanders in the first two rounds.
I’m pretty much committed to grabbing two running backs this year with my first three choices. While I really like J.K. Dobbins and D’Andre Swift (and I could have picked either in the third round), Sanders was too valuable to pass up in the second round. Nine wide receivers had been picked by that point, so there just wasn’t a wideout I felt good enough about. I also felt that the second and third tiers of receivers were much stronger than those for running backs. Kamara only turns 25 in July, and Sanders is 23, so I feel like I will be good to go at running back for several years.

Kareem Hunt in the seventh round.
Hunt turns 25 in August, so he could have several years of productive-to-elite seasons ahead of him. He needs to get his mind right, but if he ends up as the starter somewhere else (like Atlanta) next year, watch out. His talent is undeniable and he possesses the talent and frame to truly be a feature back.

Diontae Johnson in the ninth round.
Johnson could have a clear path to stardom in Pittsburgh if JuJu Smith-Schuster (currently ranked 11th at WR) is indeed on his way out. I’m happy to plug him in from time to time as my fourth or fifth receiver and patiently watch his development. There is certainly some doubt as to the long term answer at quarterback in Pittsburgh, but this is a team that tends to figure those things out.

Tyler Higbee in the twelfth round.
I kept checking on tight ends after the seventh round, and when his name was still there in Round 12, I had to pounce. He was dominant down the stretch and he and Mark Andrews will give me a serious one-two punch for several years.

Julio Jones in the third round.
I love Jones as a talent, but since this is a dynasty league, I would prefer to pick a younger player this high. I was pretty sure I’d be taking some really young receivers later in the draft, so I don’t mind having at least one or two veterans to move the chains for my team in the first year or two. However, he is 31 years of age now, so that puts more pressure on my other picks to develop quickly.

Jalen Reagor and Marquise Brown in rounds five and six.
I love the talent here, but one is a rookie and the other was injured for much of his only season in the NFL. They could both turn out to be excellent values, but I’d like to feel more confident about all of my picks in the first six rounds.

Alexander Mattison in the eleventh round.
As my fourth running back, I’d prefer he was destined for a larger workload. That can obviously happen if Dalvin Cook holds out or suffers another injury, but I don’t like having too many “ifs” associated with my players. I like the value here, but I should have also grabbed a third-down back like Tarik Cohen or James White for more balance.

Once your draft is complete you, can check out the analysis of your team. I received an A- grade (90 out of 100), and the projected standings of my team was third overall, second among starters, and eighth for my bench.

In the Team Analysis section, I received high grades for my top three running backs and my tight end, but low marks for my wide receivers. Joe Burrow was rated 11th as my QB1, but I love his upside in a dynasty league.

Once you conduct a few drafts you should get a much better feel for what positions you should prioritize and what sleepers may fall into your lap if you’re patient. It’s really user-friendly, you can bang out a few drafts in a short period of time, and it’s really versatile. You can input your league’s keepers, set a time limit for your picks, and feel much more confident when your league draft(s) take place. 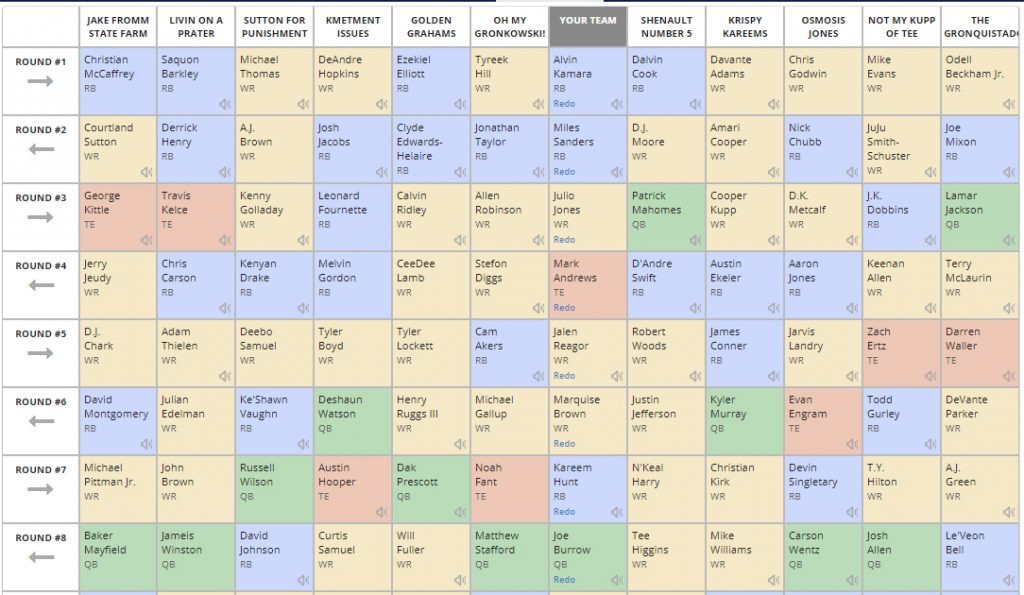 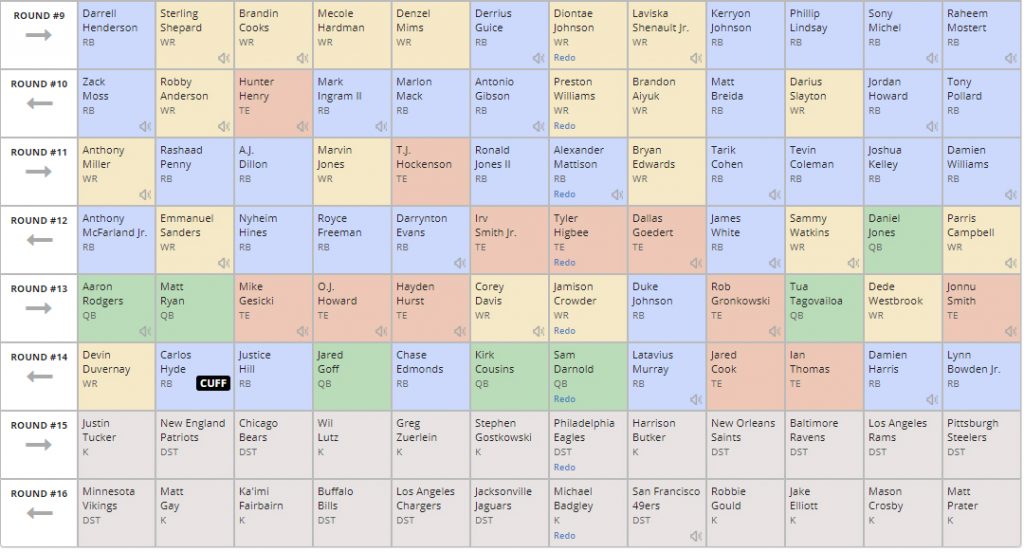 Sheldon Curtis is a featured writer at FantasyPros. For more from Sheldon, check out his archive and follow him @sheldon_curtis.

Boom, Bust, and Everything In Between - Tight Ends (2020 Fantasy Football)