It’s best to move T.Y. Hilton before the Colts complete their overhaul of their WR corps

The onset of the NFL offseason might be a time of temporary sadness for hardcore football fans, but for dynasty players (or newfound fans of the Alliance of American Football) there was no offseason. March 13 brought about the beginning of the 2019 NFL league year, and with it came free agency (oh wait, that began well before then) and then, 43 days later, the NFL Draft. There will be a lot of moving parts in the next couple months in the NFL, and undoubtedly teams are going to be looking to get significantly younger. Your dynasty squad should be looking to do the same, particularly when it comes to aging veterans who might be approaching a decline.

William Shakespeare had it right when he penned the phrase, “Parting is such sweet sorrow.” Whether it was little Joey asking Shane to come back (pretty sure he was dead, kid) or Andy getting rid of his toys in Toy Story 3, over the years, we’ve become all too familiar with tearful goodbyes. Of course, becoming too emotionally invested to your players in dynasty is a recipe for disaster over the long haul. Making the difficult decision to part terms with your favorite asset might run tantamount to Chief Bromden suffocating McMurphy in One Flew Over the Cuckoo’s Nest, but similar to that ending, it’s ultimately for the best.

Enough about movies though. The NFL’s 2019 league year is upon us and if nothing else, the past two days have shown that it, in fact, is the Greatest Show on Earth.

Of the 18 receivers that topped 1,000 receiving yards in 2018, only Antonio Brown was older than 30 years old during the regular season. In 2017, Larry Fitzgerald was the only receiver to top 1,000 receiving yards over the age of 30 (he was 34). In 2016, Jordy Nelson, Julian Edelman, Pierre Garcon, Fitzgerald, Mike Wallace, and DeSean Jackson all accomplished the feat over the age of 30 years old. While ageism has deservedly affected running back ranks in dynasty leagues for quite some time, receivers still have managed to skate by when approaching the big three-zero. As Scott Barrett over at Pro Football Focus pointed out, there’s a steady decline in production over the course of one’s career, particularly after the fifth or sixth year for receivers. Remember the reference to NFL teams wanting to get younger? It’s happening more and more frequently as FiveThirtyEight points out. For a dynasty context, the 30 or older crowd is a depreciating asset in the current NFL landscape. If you’re Jon Gruden however, swinging a trade for a 30-year old receiver is the new hipster move. 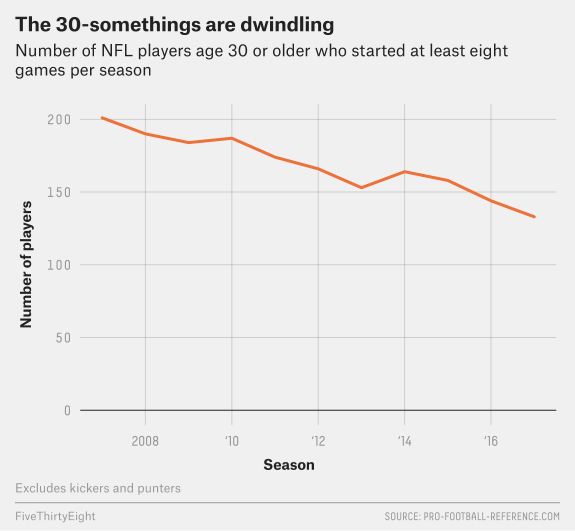 So we’ve found an age barometer for our dynasty squads. Now comes the difficult part of identifying the receivers that still carry value moving forward and can be moved for a worthwhile haul. Again, this doesn’t mean that these players are going to severely disappoint in 2019, just that their value is likely at the highest remaining point in their respective careers.

Julio Jones (ATL)
In 2018, Jones set the NFL on fire. He had 113 receptions for 1,677 yards and eight touchdowns. Moving forward though, one has to wonder whether the Falcons will join the #NeverJulio movement, particularly if it means a long term extension.

Heading into the 2019 campaign, the Falcons are up against the salary cap and have some maneuvering to do. While Jones still has two years left on his current contract, the Raiders’ trading for Brown has created an elephant in the room for a lot of NFL teams with elite receivers. Jones is also 208 days younger than Brown. Whether or not Brown succeeds with the Raiders is to be determined.

For Jones, he’s done all his work with the Falcons, and likely won’t wear another jersey. Being nearly a year younger, Jones should be looking to get as much money as quick as he can.

Aside from the remote possibility of any off the field concerns involving a holdout, Jones enters the 2019 season with few worries. The Falcons could also be looking to replace 94 targets from a season ago if Mohamed Sanu is a cap casualty. If you’re ever looking to sell high on Jones, the time to do so is this offseason. After all, there’s no guarantee Jones or his coaching staff remembers what red zone targets are in 2019.

DeSean Jackson (PHI)
The player affectionately referred to as “Peanut” is returning home. The Eagles and Tampa Bay Buccaneers arranged a trade to send Jackson back to Philadelphia. For a 32-year old receiver that relies on speed, this is the best possible news. It’s rejuvenated his short term value, and sentimentality can often lead to a small bump in value. Speaking of value, if you still have a Jackson Eagles jersey, you’re even more ecstatic. Unfortunately, the Eagles fans that currently have Mack Hollins jerseys are going to need some duct tape.

Jackson is entering an offense that he both fits exceedingly well in and has a significant void where he stands to gain the most. Carson Wentz also represents an upgrade at quarterback from Jameis Winston and Ryan Fitzpatrick. As Warren Sharp points out, Jackson and Wentz sync up pretty nicely.

Of course, Jackson is going to be 33 at the end of the 2019 season. In a young man’s game, how efficient and healthy will Jackson prove to be moving forward?

The other area of concern is opportunity. The Eagles had success running 12 personnel late last season, which could lower Jackson’s snaps. If there’s one area the Eagles try and exploit, it’s analytics. If you can get a second round rookie pick from the Dave Gettleman of your league, do it as quickly as possible.

T.Y. Hilton (IND)
The resurgence of Andrew Luck in 2018 brought about increased productivity from the Colts’ skill players. If recency bias has taught us anything, it’s that now is the time to unload some of the aging Colts skill players. Sadly, Hilton is one of those players.

Like Jones, Hilton also has just two years left on his current contract. Unlike Jones, Hilton shouldn’t command top-five money. Nevertheless, Hilton has performed admirably on the field. He’s also getting paid like it.

The Colts certainly have money available and giving a modest contract extension to Hilton shouldn’t rock the boat. For Hilton, the youngest of these three “sell now” receivers, his value comes from the revitalization of the Colts offense under Frank Reich and the fact that he’s Luck’s best target. Last season, Hilton was the only Colts wide receiver that topped 75 targets.

Whether his production last season is sustainable to the level it was in 2018 is another question. Airyards.com shows that Hilton’s RACR (defined here) was significantly higher last season than it ever has been in his career. Hilton’s aDOT was the lowest in his career, coinciding with Luck’s lowest aDOT in his career.

The quagmire that was the 2018 Colts’ receiving corps needed (and still needs) a serious upgrade. Enter Devin Funchess, who is signing with the team on a one-year contract.

Laugh all you want, but Eric Ebron was dead in the water too before last season for most dynasty owners. Given Luck’s career low aDOT, having a “second” tight end might be just what Luck needs. Of course, Funchess’ aDOT over his career has been higher than Hilton’s, so there’s a chance he could siphon some of those deep balls Hilton had become accustomed to receiving. Now just imagine if the Colts draft Parris Campbell in this year’s draft.

Newer and younger is always trendy in dynasty. Funchess certainly checks the “newer” box, but remember, he’s only 24 years old. Should the Colts decide to also address the receiver position in the draft, Hilton’s value will take a hit, deservedly or not, due to both newer and younger in the Colts’ passing attack.

Matt Giraldi is a correspondent at FantasyPros. To read more from Matt, check out his archive or follow him @Mgiraldi.