Bryce Harper is still one of the best hitters in baseball

On Wednesday I posted my 2020 Marmol Strategy article. Marmol is a cheat code to first place in your fantasy baseball league but unfortunately, you all know too well that if you employed this tactic last year, your league changed the rules on you. Some leagues already have sizeable innings limits in place to prevent said shortcuts to first. If you are in one of those leagues, I’m highly recommending my Bichette Strategy this year as a replacement.

Much like Marmol, some leagues may not allow for the Bichette Strategy, plus it requires a lot of care. You’ll be streaming multiple starting pitchers every day of the season in order to pile up wins and K’s without spending any draft capital on starting pitchers. It is an ugly way to win, but if your league allows for it, you’ll coast to a title. Don’t worry about reaching for elite closers either since their ratios won’t have any impact on the final standings. You’ll be so far behind 11th place in ERA and WHIP that even Josh Hader and Kirby Yates couldn’t help you catch them.

Instead, focus on the ratio-troubled closers who have no competition for saves. Or better yet, target contending teams who have closer battles and get both of their options. By doing this, you are guaranteed to get a load of save opportunities for a fraction of the cost. Since you don’t have to draft any starting pitchers, you’ll have plenty of room on your roster to stash six of these guys until we know who the four closers actually are.

If you do end up grabbing a starter or three, your best investment is to get high-upside pieces from the late rounds. They won’t get in the way of your unstoppable offense, but there is a chance they turn into this year’s Shane Bieber, Tyler Glasnow or Chris Paddack (by the way, these were the three targets recommended in this article last year).

It is named after the total masher, Dante Bichette, who was the best hitter on one of the best offensive teams in baseball history. His 1995 pace would have had him hit 47 homers and 150 RBIs with 16 steals and a .340 batting average if not for the strike. If that is any indication, this strategy focuses on a scorch-earth offense. The reverse is also true, however, just like that Rockies’ team. Since we won’t be drafting a single pitcher until the entire lineup is filled, our ERA and WHIP will be plenty high. Even still, we should be able to finish first or second in each of the other three pitching categories.

What are the main goals of the Bichette Strategy?

When should I use the Bichette Strategy?

I am, as always, all about using the Marmol Strategy. In many cases, however, league settings don’t allow for the Marmol cheat code. Likewise, keeper leagues and draft position can oftentimes make Pocket Rockets (I’ll cover this one tomorrow) a reach. If you can’t use the Marmol and won’t be able to enter the season with four of the top 20 starting pitchers, you can shift your focus to the Bichette Strategy which is every bit as much of a guarantee, but more difficult to carry out because you’ll need to make hundreds of transactions in the season and that isn’t an exaggeration.

There are leagues, of course, that have a limit on how many pickups you can make in a season or during a week. Obviously, the Bichette Strategy is impossible to execute in those leagues. Likewise, weekly lineup leagues don’t work either. If your league adds categories to the standard 5×5, quality starts or anything offensive make the Bichette Strategy more attainable. Strikeouts per 9 or any other ratio categories do the opposite, however. If you have more specific questions about how it fits your league, don’t hesitate to shoot me a Tweet @BobbyFantasyPro.

If Pocket Rockets, the Marmol Strategy or the Bichette Strategy don’t seem to fit into your league settings, worry not, I’ve got one more rolling out next week called the Moneyball Method. Like the others, it succeeds by punting two categories and mopping the floor with your competition in the other eight. Be sure to check in next Wednesday for an explanation if you haven’t drafted yet.

Now, I’ll show you how the standings would ideally look if you properly execute this strategy (don’t try to replicate this in Draft Wizard, though, because there is no way to mimic gaming the system with 300+ streamer starts). Afterward, I’ll provide a sample roster that I created using a 12-team roto league in Draft Wizard. 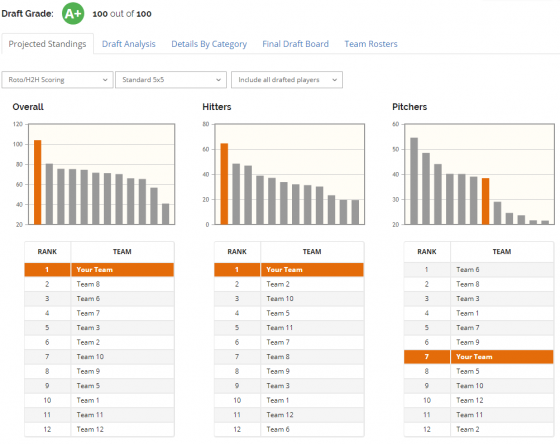 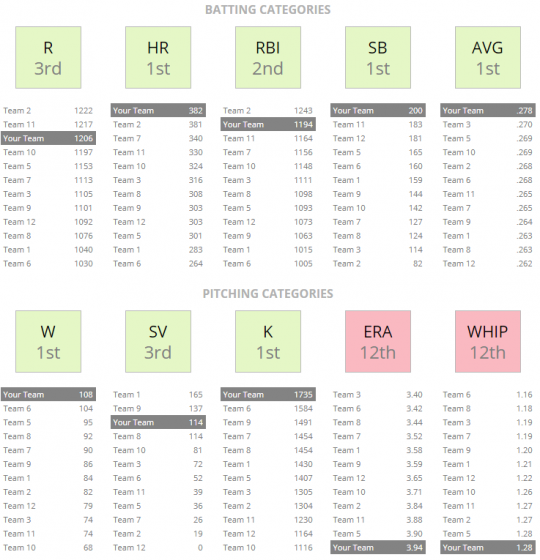 I drafted from the top of the first round as it is ideal for the Bichette Strategy this year. You can build a five-category offensive juggernaut if you spend your first 14 picks on hitters. As you can see, from that point forward, I added six relievers which should combine for 80+ saves berween them. Sprinkled in between them all were five high-upside starting pitchers. Most likely, I’d give them three weeks to breakout, then cut them or sell them for further offensive upgrades since their ratios won’t do me any favors. Here is an example of how I’d draft for this strategy:

Thanks for reading and good luck!