Fantasy baseball is unlike fantasy football in the sense that most leagues aren’t just going for a total accumulation of points. Roto and especially head to head leagues allow you to ignore one or two categories which, in turn, creates value in every round of your draft. This allows for several category-punting strategies like my favorites, the Marmol Strategy and Bichette Strategy which I wrote about earlier this week. Today’s strategy is much different than either of those, however.

In the Marmol, you are punting wins and strikeouts but you can only accomplish it if your league doesn’t have an innings limit or 3+ starting pitcher spots in your starting lineup. The Bichette is all about punting ERA and WHIP but requires you to stream 250+ starts in a season which some league won’t allow for because of a transaction cap or innings maximum. Pocket Rockets can be exercised in any league unless your league is crazy enough to use something strange like hits as a sixth category.

I’m always looking for the holes to exploit in each league’s settings. Maybe that isn’t fun for you, but if you don’t do it, someone else will and I’ll bet my bottom dollar they win your league. Roto leagues and especially head to head leagues have a weakness in that your team can carry a 99.99 ERA and 0 homers yet still win, just so long as you are great in every other category. Now, you know those aren’t the best examples, of course, because high ERAs heavily correlate to high WHIPs and partially to low Ws, Ks and saves.

There are strategies where you are forced to punt only one category, but it becomes more difficult to place near the top in all nine of the other categories. That is until the landscape of baseball so quickly evolved. Suddenly, 170 innings for a starting pitcher is great durability. Not only that, but third-tier pitchers and beyond (rounds 8+) are incredibly volatile from year to year. In 2020, I see 20 starting pitchers who I trust, and in Pocket Rockets (named for getting two aces early), I now want three, or even four of those top 16 starting pitchers. Doing so will virtually guarantee my teams will dominate ERA, WHIP, Ks and Wins. Since my rotation is lights out, I can wait on closers and grab four third-tier ones late, which won’t kill me in ERA and WHIP, but will place me in the top three for saves as well. Wait, if you are only drafting one hitter in the first five rounds, how can you compete in ANY hitting category.

Remember how I said homers correlate so closely with RBI and runs? Well, the reverse is true with batting average. If you want to compete in batting average, you’ve got to go out and get your players early. meanwhile, if you entirely punt batting average, value opens up all over the hitting side of the equation. Suddenly, Joey Gallo soars to a top 20 fantasy hitter. You can wait until the 7th or 8th round to grab him. There are countless examples of the same type of thing. If you wait on offense then load up with power-only bats late, you can still win Homers, RBI and runs. Oh, by the way, Mallex Smith‘s ADP is depressed because of his batting average as well. I’ll take 40 steals in the 14th round, thank you very much.

If you pick 1st through 4th, you still have to take Christian Yelich, Ronald Acuna, Mike Trout or Cody Bellinger. There is no excuse, even for a great strategy. Now, if you can trade either for some great picks, go for it, but otherwise, you’ve got to go with the Marmol Strategy or the Bichette Strategy (if your league allows for it). If you pick 5th or later, I’m grabbing Gerit Cole, Justin Verland or Jacob deGrom in the 1st.

Four of the true aces 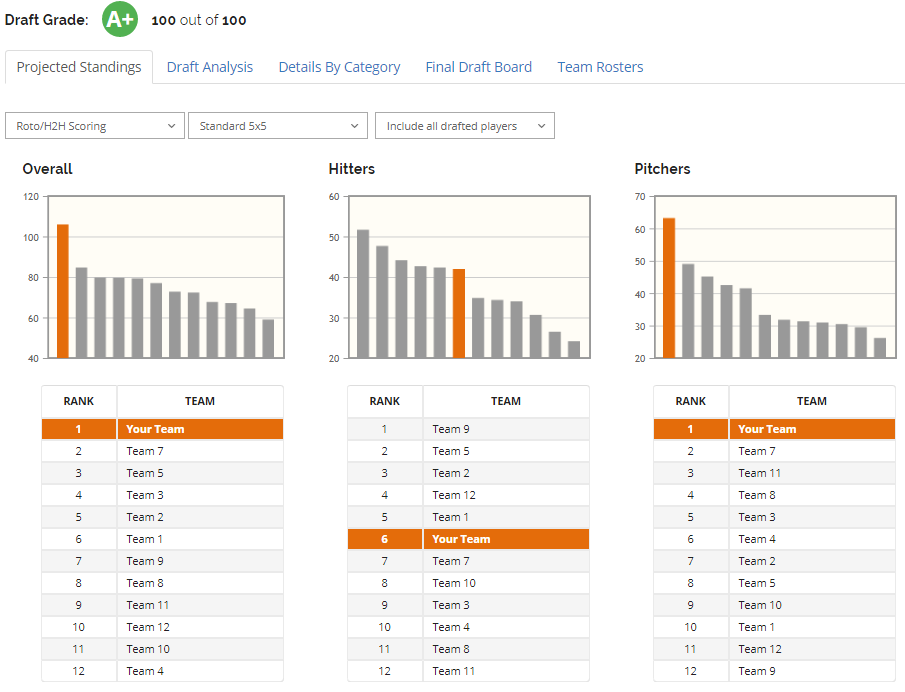 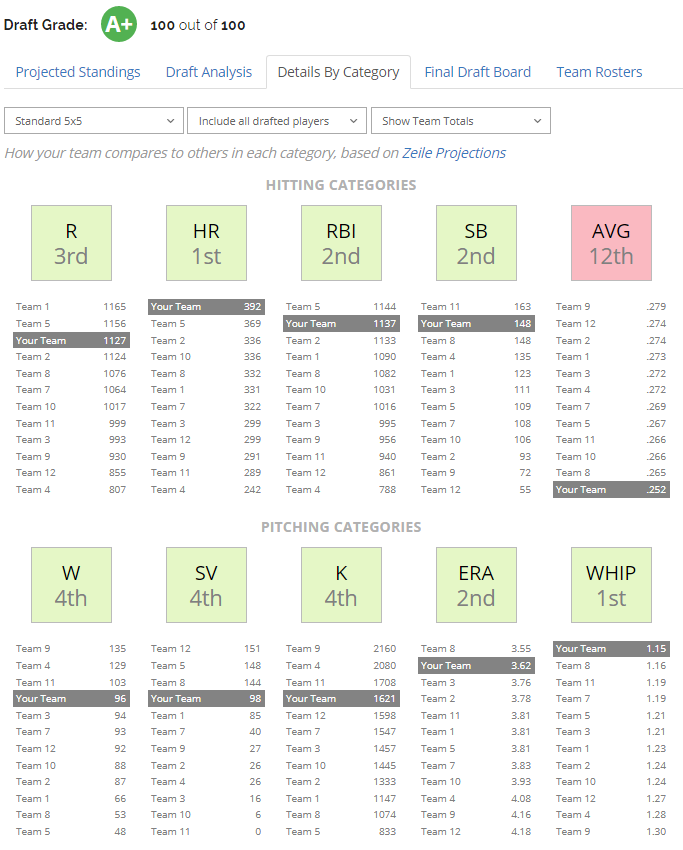 I built this team picking from the 12 spot which should enable you to secure two of the top four aces. As you can see, the hitting numbers are unbelievable despite picking four pitchers in the first six rounds. ERA and WHIP are a gimme with that group at the top of my lineup. In other drafts, Ks and wins were at the top, and I often finish 2nd in saves, but at the expense of dropping a few spots in stolen bases and runs. Here are the players that brought me this 100/100 grade on Draft Wizard.