A.J. Green is one of three receivers in the last 10 years to have 13-plus targets with fewer than 30 yards receiving in a game.

Whether a tree falling in a lonely forest makes a sound has been debated ad nauseam in popular culture since the early 1700s, but the answer – and its implications – go beyond the famous question itself.

From a physics standpoint, a falling tree in a forest unequivocally makes a sound regardless if someone is there to hear it.

But from a practical standpoint, why would a person care about a tree if it’s not crashing into their house or disrupting the connection they use to stream football games on Sundays?

The sound (or lack thereof) from the falling tree is a red herring in this classic thought experiment, which is actually about how context colors people’s responses to different stimuli.

If a person returns home from work to discover a tree has flattened their kitchen, for example, they’re likely to assume the tree made more noise than a similar crash would in an empty forest.

Not to get too philosophical, but this lesson of contextualized experience can apply to the fantasy football world as well, where fans are privy to an abundance of out-of-context numbers every Sunday on Twitter.

Because of this information overload, fantasy managers need to decipher which stats are trees falling in the forest and which numbers could legitimately make or break a fantasy team.

In an effort to trim some of the statistical fat, I’ve provided five contextualized numbers to know heading into Week 3 of the NFL season.

And be sure to check out the rest of Week 2’s numbers to prepare for Week 3 with our target analysis and notable snap count rundown.

After Week 1, many fantasy experts anointed J.K. Dobbins the new lead back in Baltimore because of his playing a backfield-leading 39 percent of the Ravens’ offensive snaps in their 38-6 victory over the Browns.

Lost in Dobbins’ Week 1 exaltation was that in 2019 blowouts (games which the Ravens won by 20-plus points), Ingram averaged just four more snaps per game than his backup Edwards. With second-rounder Dobbins in the fold this season, Ingram’s usage in blowouts was almost certain to remain throttled, as evidenced in Week 1.

Dobbins was hyped as a potential league-winner throughout the offseason, but I see no clear path to significant fantasy relevance as long as Ingram remains healthy, especially in half- and full-PPR leagues.

Entering Week 2, only 10 rookie running backs since 2010 had totaled at least 23 carries in one of their first two career games. On Sunday, both Joshua Kelley (23) and Jonathan Taylor (26) joined that group, which added Clyde Edwards-Helaire to the ranks in Week 1.

Taylor’s usage isn’t a huge surprise after the season-ending injury to fellow Colts running back Marlon Mack, but Kelley’s sustained production through two weeks is both improving his fantasy stock and lowering Austin Ekeler’s.

Ekeler has also been slightly better after contact, but Kelley holds a 6-1 advantage in rushes from inside the 10-yard line.

Time will tell, but the drafting of Ekeler with an early- or mid- first-round pick looks like a mistake, especially in non-PPR leagues.

Much was made about A.J. Green’s three catches on 13 targets this week, which according to NFL.com made him one of three receivers in the last 10 years to have 13-plus targets with fewer than 30 yards receiving in a game.

While that stat is astounding, at least three of those passes from rookie quarterback Joe Burrow were uncatchable, but the box-score blame seems to fall solely Green, who spent much of Thursday evening being shadowed by rising star cornerback Denzel Ward.

In 21 other career games in which Green has seen 13-plus targets, he’s averaged nine catches, 123 yards and about 0.7 touchdowns, good for 20.8 half-PPR points per contest. 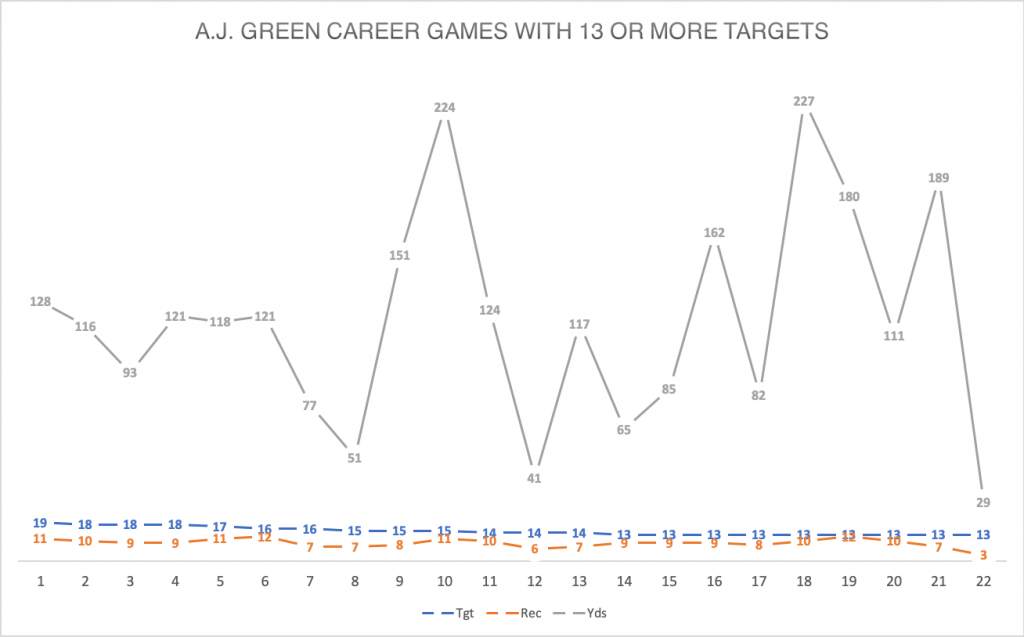 Even if Green isn’t the same player he once was, I’m betting a second 13-target game this year will look more like his career average at that usage than his underwhelming numbers in Week 2.

Tennessee Titans tight end Jonnu Smith is averaging 11.3 yards after catch per reception (YAC/R) this season, which ranks third among NFL pass-catchers with at least 10 targets.

While big and broken plays can artificially inflate YAC, consider Smith ranked second in the NFL in YAC above expectation to teammate A.J. Brown last season, and that in January New England Patriots head coach Bill Belichick referred to Smith as “probably the best in the league” after the catch.

Smith isn’t a high-volume tight end like Travis Kelce, George Kittle or Darren Waller, but with Brown potentially out again for Tennessee in Week 3, Smith’s usage and ability to create yards make him a strong play at a once top-heavy but suddenly deep fantasy position.

Stefon Diggs has been targeted 22 times in 2020, which marks a career-high for the Buffalo Bills’ new receiver through the first two weeks of a season.

There was concern about Diggs’ usage in Buffalo’s run-heavy offense, but Bills offensive coordinator Brian Daboll has opened the playbook for third-year quarterback Josh Allen, who ranks second in the league in QBR and first in passing yards despite two seemingly run-heavy game game scripts to start the season.

With matchups against the Rams, Raiders, Titans, and Chiefs coming up, the Bills will likely continue throwing the ball at a high rate, which means Diggs should remain a strong WR2 play for the foreseeable future.

Welcome to StatHero: A New Kind of DFS Experience