Welcome to Week 3! Last week was an absolute bloodbath, and if you play primarily in redraft leagues, I hope you didn’t lose too many players. Daily fantasy sports (DFS) are a great alternative to redraft because you dodge the consequences of injuries, and they’re a great option to check out if you’re a frustrated Saquon Barkley (or Christian McCaffrey) drafter.

Each week, I’ll break down the projected player roster percentages at the top DFS sites. These figures are generated based on figures pulled from full slate contests, so they won’t be perfectly accurate, but they give us a good measurement of who’s popular. 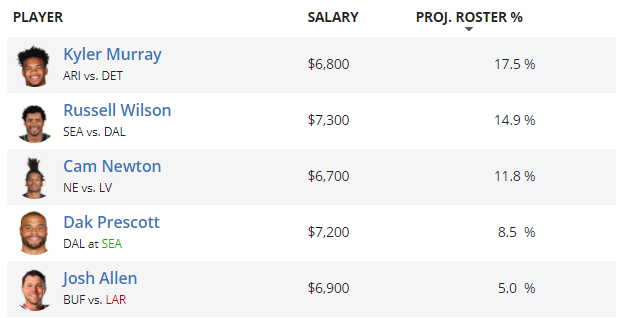 Kyler Murray should be one of the most popular picks this week at DraftKings. He draws a juicy matchup against the Lions, who are without top cornerback Desmond Trufant. Both sides of the Seattle and Dallas matchup, Russell Wilson and Dak Prescott, should also be common plays. Look for a lot of stacking of this matchup in cash leagues — it’s got the highest projected point total on the slate. Newton should also be a popular pick against the Raiders with his affordable salary. Josh Allen rounds out the list against the Rams, and while I wouldn’t be surprised to see him get fewer passing attempts than he’s gotten over his first two games, his rushing ability gives him a decent floor.

Miles Sanders should be a popular selection this week, and with the Bengals’ injured defensive line, I think he’s a great option this week. Geno Atkins is out, while ancillary defensive tackle Mike Daniels is questionable. Ezekiel Elliott is the most expensive player to make this list, and he’ll need to go off to keep the Cowboys in what should be a high-scoring battle with the Seahawks. That said, neither Zeke nor Sanders is close to chalk, so you don’t have to target or avoid them based on your contest settings. Austin Ekeler is a great fit for DK lineups due to his matchup and the PPR scoring settings, but even then, I can’t help but think that Joshua Kelley may outscore him. Jonathan Taylor is a good target against the Jets, as the Colts should just grind out the win against them by keeping the ball on the ground. Kenyan Drake wraps up the list in his game with the Lions, and I’ll get to this in a second, but I’d prefer to play DeAndre Hopkins in this matchup. 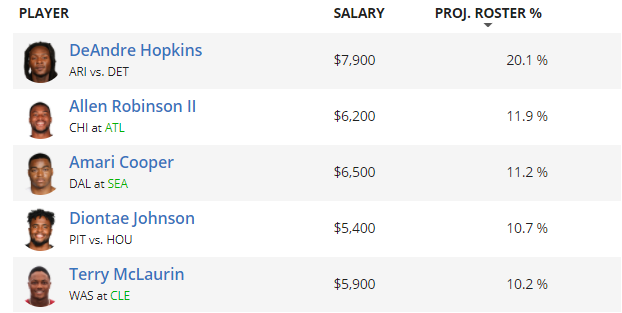 DeAndre Hopkins is primed for a big game, and I wouldn’t be surprised to see his roster percentage rise even further, as news that Christian Kirk and Desmond Trufant won’t play didn’t break until Friday afternoon. Sure, he’s an expensive option, but he’s also guaranteed to see tons of volume. Allen Robinsons should be another popular pick, likely because of how awful the Atlanta Falcons have looked awful on defense. Only one receiver in the Dallas/Seattle tilt, Amari Cooper, makes this list — and that’s despite both quarterbacks making an appearance. I would expect more users to stack players from those games by Sunday. Diontae Johnson slots in next, and while the Texans haven’t shown much life defensively, they’ve let their opponents run all over them. So sure, he’s a great value at this price, but beware of the possibility of a run-heavy game script. Terry McLaurin wraps up the list in a smash spot versus Cleveland, and I like him a lot because both of the Browns’ starting cornerbacks (Denzel Ward and Greedy Williams) are dealing with injuries. 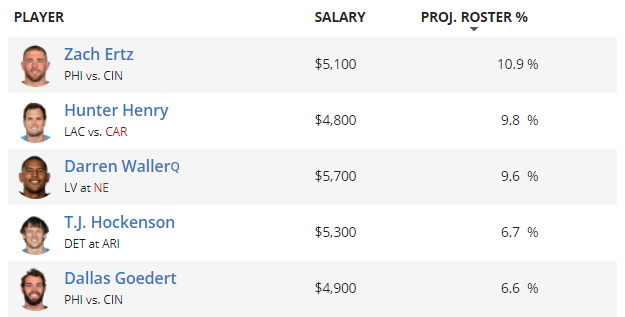 We’ve got a pair of Eagles on this list, as both Zach Ertz and Dallas Goedert should be popular plays against the Bengals. Now that the Eagles are without Jalen Reagor, Carson Wentz doesn’t have many options, and both are good bets to see a ton of targets. Speaking of targets, Darren Waller just had 16 of them in a game last week. The Patriots are a much tougher matchup, but as long as Waller players through his questionable tag, he’s a great floor option this week. T.J. Hockenson and Hunter Henry round out the list; Hockenson likely because of the Cardinals’ poor tight end defense from last season, and Henry because of his solid performance so far this year. I’m higher on Henry than I am on Hock, and I’d probably fire up Goedert before I put Hock in one of my lineups — the Cards have improved defensively this season, and Matthew Stafford could have Kenny Golladay back on Sunday. 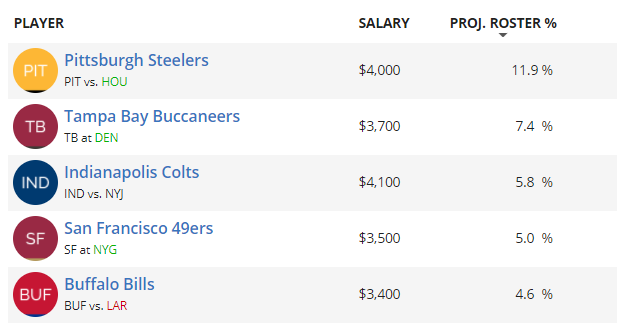 Interestingly, there’s no clear consensus pick for D/ST at DraftKings this week. The Steelers slot in first, and it’s surprising to see FanDuel players want to target Deshaun Watson. I doubt that he’ll have a big game, but at this salary, it seems kind of risky to bet against a quarterback like him. The Buccaneers should be another popular play, and it’s not surprising that DraftKings users want to target backup quarterback Jeff Driskel with the Buccaneers’ cheap salary. I’m a fan of Driskel’s, but even he might struggle, as the Broncos might not have Jerry Jeudy (and they won’t have Courtland Sutton until next year). I think that the Colts are one of the smarter plays this week, as even though they have a high salary, the Jets have multiple injuries at offensive line and wide receiver. The 49ers come in next despite their litany of injuries. Sure, they should be able to pummel the Giants regardless, but it’s hard to get excited about them. The Bills round out the list against Sean McVay’s Rams, and I don’t think that’s a good take, either, as Buffalo could be without two of their starting linebackers.