We have arrived at the final installment of my four-part 2020 Fantasy Football Consistency series. You can read my previous articles on quarterbacks, running backs, and wide receivers).

If you’re new to this series, we evaluate the top-drafted players and presumed fantasy starters for a 10- or 12-team league based on weekly average scoring and variance. Specifically, I compare players’ per-game scoring averages (PPG) and coefficients of variation (CVs) – which measures standard deviation (SD) against the mean. In our context, the lower that the CV is, the less risky the player. After calculating players’ individual PPG and CVs, we visualize the results through the creation of four quadrants, forging distinct risk-and-reward quadrants – i.e., high risk, low reward (HRLR), high risk, high reward (HRHR), low risk, low reward (LRLR), and low risk, high reward (LRHR).

Players in the LRHR quadrant are the most desirable. However, they’re usually expensive, so there may be better strategies to follow. It’s crucial to maximize your scoring each week while limiting your exposure to rampant fluctuations, especially with regards to tight ends.

Full disclosure, because the TE position is incredibly volatile and thin, I shrunk the sample to the top 10 tight ends due to outlying results with Noah Fant and Hayden Hurst, who were the 11th and 12th tight ends with data (i.e., Rob Gronkowski missed all last year) being drafted.

The visualization below illustrates FantasyPros’ highest-drafted tight ends per average draft position (ADP) in half PPR leagues as of July 12.

According to PFF data, on average, these 10 tight ends produced 11.3 PPG — with each game defined as accumulating at least one opportunity (i.e., targets plus rushes). There’s a SD of 6.2 points, which leads to a 55.3% CV. This suggests the average top tight end should score between 5.1 and 17.6 fantasy points each week.

With this much variance, we can understand the appeal of drafting Travis Kelce or George Kittle early in your drafts. However, if you miss or avoid selecting one of these elite options (or Zach Ertz and Mark Andrews), you may feel relegated to the wait-and-see approach, or you may choose to stream the position instead. Hopefully, these numbers can help you identify a primary strategy (e.g., target Kelce or Kittle to gain that secure, added-value) or a back-up plan if you’re presented with a curveball throughout the draft. 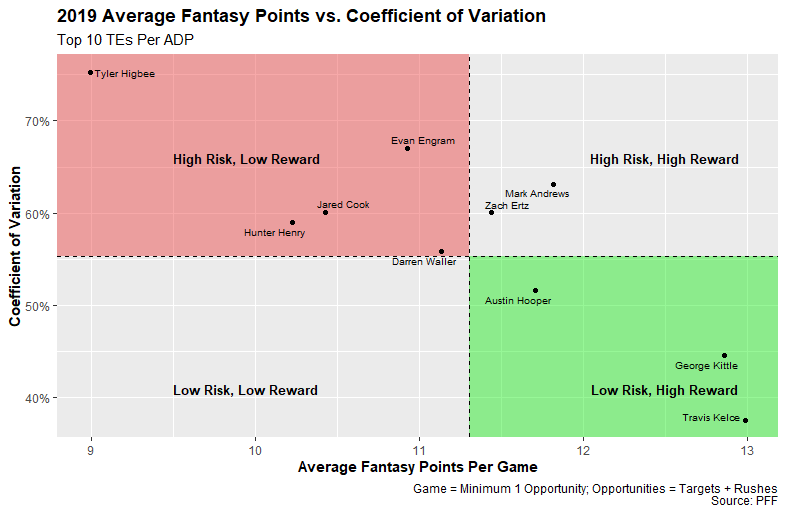 Travis Kelce (KC): 13.0 PPG, 4.9 SD, 37.6% CV
Unsurprisingly, the premier fantasy football tight end over the past several seasons appears at the top of my list of players to target. However, it’s been difficult for me to draft him because he’s either gone too early or has some competition from high-upside running backs that I’d prefer to have instead. Nonetheless, if I went into a draft focused on grabbing one of the top tight ends, I’d much prefer — as you’ll see below — taking the safety and upside of Kelce over that of Kittle. Kelce has incredibly low volatility and plays on a premier pass-first offense with the best quarterback in the league.

Mark Andrews (BAL): 11.8 PPG, 7.5 SD, 63.1% CV
This pick is all about upside, as Mark Andrews has a semi-expensive ADP of 31 overall as the TE3, but he displays supreme athleticism and a great connection with the reigning MVP, Lamar Jackson. In fact, Andrews finished just second in PFF’s yards per route run (YPRR), which indicates players’ receiving efficiency, and it’s one of the stickiest metrics year-to-year. With an anticipated snap rate increase (he only reached 50% of offensive snaps in six games last year per Pro Football Reference) following the departure of Hayden Hurst, Andrews may ascend into the Kelce/Kittle echelon.

George Kittle (SF): 12.9 PPG, 5.7 SD, 44.6% CV
Kittle is one of my favorite players to watch, and he’s arguably the best player in the league across all positions. He’s an athletic freak and one of the top receivers in the NFL (he led the league in YPRR last season after finishing second to Julio Jones in 2018), and he’s also considered a premier blocking tight end. Nonetheless, there are significant risks associated with Kittle. He plays on a run-first offense with an occasionally suspect quarterback, and he carries significant injury concerns. As Dr. Edwin Porras, DPT of Fantasy Points wrote in his recent “Injury Volatility: Tight Ends” article: “…George Kittle, who is legitimately a risk in 2020 as he disclosed that in 2019 he dislocated his shoulder and tore his labrum….Nevertheless, taking Kittle at his word that the shoulder is at risk for dislocation, the numbers are the same for Dalvin Cook (42%-55% chance [of] re-dislocation without surgery).” With a similar ADP as Kelce, give me the player on the better offense with the best signal-caller in the world.

Hunter Henry (LAC): 10.2 PPG, 6.0 SD, 59.0% CV
Even when Henry falls in drafts, I can’t force myself to draft him over high-upside running backs and wide receivers in the middle-to-late rounds. Despite impressing many to begin his career (he finished as the sixth- and second-highest-graded TE per PFF in 2016 and 2017, respectively), Henry was an HRLR option last season with Philip Rivers at the helm. Henry is now stuck with either Tyrod Taylor or rookie Justin Herbert leading the presumed run-first offense, and he’s arguably the third — or even the fourth — receiving option after Keenan Allen, Austin Ekeler, and Mike Williams. I’d rather select a higher-upside play like Tyler Higbee (based on the last half of the 2019 season, of course) or Evan Engram in the middle-to-late rounds at tight end, or I’d simply wait for Hayden Hurst, T.J. Hockenson, or Jonnu Smith instead.

Boom, Bust, and Everything In Between - Tight Ends (2020 Fantasy Football)