Every year we have players changing teams. The majority of the fantasy community becomes obsessed over starting caliber pieces on new squads. While that is rightfully worth attention, the often overlooked are returning running backs with departed depth of competition.

This is why I created my annual piece on significant vacated touches and how they affect a backfield. Returning backs with 100-plus touches on a team that just saw a fellow running back departure who had 100-plus touches are heavy favorites to see more action as a result. Coaches and schemes have tended to rely on the proven, known commodity over a newcomer trying to fill that void. High caliber draft picks or free agency will affect this, and while a multitude of additional factors are at play, this simple method can provide us with reliable odds on who will see more volume in the upcoming year.

This is easily grasped through the following chart. What we are trying to measure is an increase in volume, and this is measuring exactly that. Over the past two years, 70% of the candidates increased their touches per game, and a total average of 2.2 increased touches per game. Prior to this year, I used full season stats which can be misleading to injury. Switching to per game usage gave similar results and takes missed games into account more effectively to paint us a better picture. 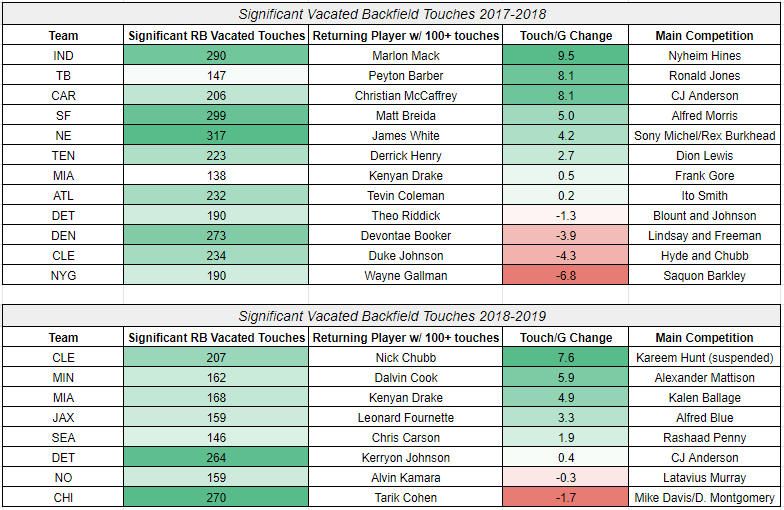 The process as stated before is simple: running backs returning with a major role returning to their same offense are often more relied upon than their newly adapting competition. As you can see above, it plays out that way rather often.

The pitfalls we need to be wary of are two-fold. Is the returning 100 touch player strictly a limited role-playing or satellite back? And did their team add a high-profile free agent or rookie?

If the answer to both is no, then an increase in usage is practically inevitable.

The 2020 list is made the same way and can be seen in the chart below. It draws specific attention to places like Houston and Los Angeles where a bountiful 200-plus touches are available for the taking.

In looking at the 2020 qualifiers, we can break them out into two categories as they relate to fantasy. The first group having the greater odds of increased volume and production, and the second being slightly more ambigous.

Last year, the five players listed in this section had 100% hit rate in garnering more touches per game. These next four players have a similarly great opportunity to increase their volume this time around.

1. Austin Ekeler (LAC)
Ekeler exploded onto the fantasy scene in 2019, mostly in part to having the second-best receiver production next to Christian McCaffrey for a running back. He finished as the RB4 in PPR leagues and now has 204 available touches up for grabs through the departure of Melvin Gordon. In the four weeks Gordon was holding out, Ekeler averaged 20 touches per game. Pair this with the offensive line improvements, and he has the potential to be a top-5 running back in 2020.

Throughout my research, these 4 categories can help us most to determine next year fantasy production for RBs:

How does Ekeler fair? 👇

2. Le’Veon Bell (NYJ)
This is the player that surprised me most on this list. Adam Gase is the ruin of fantasy players everywhere, but the stars are aligning for a nice bounce-back year for Bell. Both Bilal Powell and Ty Montgomery left in free agency and were replaced by age-defying Frank Gore and rookie Lamical Perine. Gore is certainly a shell of his former self, and it was evident where he averaged less than 2.5 yards per carry in six of his eight last games along with practically non-existent work in the receiving game. Bell is also expected to increase his touchdown efficiency based on his volume of yards and touches after a down scoring season in 2019. A slight volume and efficiency increase is likely in the making with a re-upholstered offensive line as he approaches his second year in the Jets’ system.

3. Miles Sanders (PHI)
Jordan Howard’s departure with essentially no new additions has Miles Sanders workload sizzling with upside. In six games without Howard, Sanders averaged 19.9 touches per game and 18.4 PPG in PPR leagues. There is practically nothing in his way to 20+ touches per game this year barring a major free agency acquisition for the Eagles. This is starting to become baked into his ADP as it has slowly been rising up the boards all offseason to RB11 currently. The second-year back is poised to take an even bigger leap.

4. Kenyan Drake (ARI)
In the trade that shook the football world, the Cardinals effectively sent David Johnson to the Texans for a deal that included DeAndre Hopkins. After Drake took over in Arizona to become the starter, Johnson was still on offense with a surprising average of 26% of the offensive snaps per game. Now out of the picture, the remaining competitor for touches is Chase Edmonds who had a measly two total touches in the final four weeks behind them both. Drake was a fantasy playoff winner in 2019 will continue his role as the unquestioned starter in a lovely spread offense that plays perfectly to his strengths. Expect big things from Drake this season.

5. Ronald Jones (TB)
The fantasy world is splitting at the seams trying to decipher the Buccaneers backfield. What we do know is that Peyton Barber (170 touches) has departed leaving volume up for grabs. Rookie Keshawn Vaughn will see instant playing time this year, but that doesn’t mean Jones can’t take a step forward. Jones was already starting to come around as he averaged 14.3 touches per game in his final four starts. He’ll need to carry that momentum along with his 1,000-plus all purpose yard effort into this upcoming season, and I’m betting he can do so.

6. Josh Jacobs (LV)
Just when we thought Jacobs was about to secure the workhorse role, the Raiders re-signed passing down specialist Jalen Richard to a fresh contract and drafted RB/WR hybrid Lynn Bowden Jr. in the third round of the draft. The departure of DeAndre Washington is still more impactful than many realize, as he averaged 4 carries and 1.5 receptions per game when both were healthy. While I believe his receiving work stays abysmally low, he might even see more carries this year and is my second-best bet to lead the league in rushing yards behind only Derrick Henry.

7. Duke Johnson (HOU)
Many people believe that 28 year-old David Johnson is washed up as a player. Whether or not that’s true, Duke will seemingly keep his receiving role playing ability along with a healthy share of carries. He has never gone a season with fewer than 60 targets, and just rushed for over 400 yards for the first time in his career last season. Duke finished as RB29 in 2019 yet is being drafted 20 spots lower as RB49. Houston has the most significant vacated touches of any team on this list at 255 and many are acting like his chance for more volume got worse. He is a perfect zero-RB or late-round target.

8. Raheem Mostert (SF) & Tevin Coleman (SF)
The San Francisco backfield might be the most interesting yet ambiguous group in the NFL. Shanahan’s scheme is extremely running back friendly, yet it seems many players can thrive in it. Jerrick McKinnon is being held onto year after year despite major injuries, so it’s apparent that he remains in their plans. Matt Breida leaves 142 touches behind that Mostert, Coleman, and McKinnon will all be eager to soak up. While Mostert is the starter for now, his recent trade request has left the waters very murky. Coleman and McKinnon are currently the better values at ADP as of writing.

9. Damien Williams (KC)
Some very respected fantasy analysts are bullish on Williams this year, such as Brad Evans. Being a starter in the Chiefs’ backfield is a gold mine, but how long can he keep the job? We’ve seen a multitude of average backs perform well in Andy Reid’s system such as post-prime LeSean McCoy at 31 years old, Spencer Ware, and Charcandrick West. The last two stud backs they had were Jamaal Charles and Kareem Hunt, who inherited massive workloads. Them spending a first-round pick on Clyde Edwards-Helaire is a statement enough in itself. When you factor in his top-tier pass catching chops and tackle breaking abilities from college along with that draft pedigree, it’s seemingly evident that he will become the majority starter around mid-season at the latest. McCoy’s departure makes his transition into a sizable load early even more likely.

10. Devin Singletary (BUF)
The Bills departed with Frank Gore’s journeyman services and replaced it with third-round draft selection Zack Moss. Singletary had a respectable season, but it is easy to believe that Moss will represent much more competition than Gore did at this stage in their careers. While the opportunity is there for more volume, Moss should command plenty of his fair share. Neither have a compelling touchdown upside as Josh Allen was greedy in the ground game and red zone. Allen’s nine rushing scores accounted for 69% of the Bills’ rushing touchdowns. We can expect that trend to continue barring a dramatic change, and Moss’s bigger body size should command what’s leftover for goalline work.

Significant vacated touches are one of the easiest ways to identify the opportunity for more volume. And as we all know in fantasy, volume is king. Keep this as a valuable resource when approaching your drafts in the upcoming weeks.

Thanks for reading and stay golden! If you like what you learned, follow me @DavidZach16 for more interesting stats and tidbits throughout the year.