Now is a great time to run some Best Ball drafts on the precipice of NFL free agency. You’re going to get a discount on some great players that will assuredly switch teams this offseason (Will Fuller V, JuJu Smith-Schuster, etc.) as well as rookies who will get drafted in April. Draft discounts on rookies are the greatest before the NFL Draft. Once they get their landing spot, they’ll shoot up draft boards.

For this mock draft exercise, we’ll use the FantasyPros Draft Wizard to draft this team. The settings are:

After randomizing my landing spot, I have the third pick, so let’s go!

1.03: Saquon Barkley (RB – NYG)
Barkley’s ACL tear in Week 2 ended his season abruptly, but he should be fully healthy to go by Week 1. The decision between drafting either Barkley, Dalvin Cook, and Alvin Kamara at picks 1.02 through 1.04 will be heavily scrutinized throughout this offseason. However, Barkley is still the easy pick for me if I have an earlier selection. He should have a gigantic opportunity share and has an excellent shot of leading the Giants in targets in 2021.

2.10: George Kittle (TE – SF)
As a card-carrying member of #TeamEliteTE, Kittle was a no-brainer at the end of the second round.

Tight ends that have gained 67+ receiving yards per game over their career, before turning 28:

When Kittle is on the field, good things happen. The passing game will only get better when Kittle, Deebo Samuel, and Brandon Aiyuk play together. Imagine if the 49ers get a passing game upgrade.

Even if they don’t, Jimmy Garoppolo should be more than capable of peppering Kittle with targets. 2020 was a bit of a lost season for Kittle — and the 49ers in general — due to injuries, but Kittle remains an elite tight end. You’re unlikely to get a discount, but he’s worth a pick in the first two rounds of fantasy drafts.

3.03: Justin Jefferson (WR – MIN)
4.10: Tee Higgins (WR – CIN)
5.03: CeeDee Lamb (WR – DAL)
There’s a running theme here. I landed these second-year wide receivers in three consecutive picks: Jefferson, Higgins, and Lamb. All three are tethered to ascending or stable offensive systems with tremendous upside potential in year two. Higgins and Lamb are only lower in ADP because their quarterback’s mid-season injury put a halt to their respective team’s offensive production. Still, if Joe Burrow and Dak Prescott are fully healthy, the sky is the limit. At the very least, I should be able to get two top-24 finishes out of these receivers each week.

6.10: Kyler Murray (QB – ARI)
Murray was in the MVP discussion up hurting his shoulder in Week 9, after which his production tapered off considerably. That said, Murray was still the QB3 in terms of fantasy points per game. He fell just short of 4,000 passing yards but racked up 819 yards on the ground, establishing himself as a dual-threat quarterback and one of the few premium quarterbacks in the early-to-mid rounds of fantasy drafts. To get Murray in the sixth round is quite a coup, as he has overall QB1 potential for the foreseeable future.

7.03: AJ Dillon (RB – GB)
I’m notoriously bearish on Dillon, but a potential starter’s volume in an efficient offense is good enough to justify this pick even two rounds earlier, where he’s likely to go in redraft formats. With Aaron Jones potentially signing elsewhere and Green Bay’s running back room in a state of turnover, Dillon is the top option. His “Derrick Henry-lite” frame should be conducive to the Packers’ ground-and-pound offense under head coach Matt LaFleur. While he’s unlikely to provide much in the receiving game, 200 carries seem like a solid number for the former Boston College product.

8.10: Chase Edmonds (RB – ARI)
Kenyan Drake is a free agent, and according to Myles Simmons of Pro Football Talk, Cardinals head coach Kliff Kingsbury said he has “all the confidence in the world” in Edmonds handling a featured role. Edmonds is the front-runner for the starting running back job. Edmonds was the sixth-most targeted running back this past season and ended up as RB28 in half-PPR formats. As a speculative pick at the end of the eighth round, you can do worse with somebody who could find his way to 200-plus opportunities in 2021.

welcome to the nfl, laviska pic.twitter.com/9skcB2Hd5I

Urban Meyer’s position as new head coach for the Jaguars may very well be summarized as “here for a good time, not for a long time.” That said, it’s terrifying what Meyer (and presumably Trevor Lawrence) could do with a talent like Shenault outside of typical passing-game concepts. Getting a talented receiver and potential game-changer at 9.03 is a beautiful thing.

10.10: Nyheim Hines (RB – IND)
Hines should work in lockstep with Jonathan Taylor as a quality receiving option out of the backfield. I just mentioned Edmonds being the sixth-most targeted running back, but Hines was third with 77. Since I drafted Barkley so high and didn’t return to the position until Round 7, it’s nice to get a heavily targeted floor option at running back. Hines could be the third option in this passing game with the newly installed quarterback Carson Wentz. He fills a niche role, and you want your Best Ball roster to tell a story.

11.03: Christian Kirk (WR – ARI)
12.10: Parris Campbell (WR – IND)
Kirk and Campbell are (still) upside receivers who can offer more than the ADP suggests. Kirk has the opportunity with Larry Fitzgerald (presumably) retiring and DeAndre Hopkins needing a running mate. Do the Cardinals give Kirk that shot? He’s had three seasons to show something and has disappointed. But now, the slot position is open, and that’s where Kirk shined at Texas A&M. If he can handle the slot for Murray, we could see a breakthrough performance in 2021.

If Campbell could find some health, a four-leaf clover, a lucky rabbit’s foot, or some combination of the three, we’d be onto something. Campbell was a trendy sleeper last season with noodle-armed Philip Rivers at the helm, but he could finally reap the benefits lining up in the slot for the receiver-depleted Colts. His price is meager, and these are low-risk/high-reward players to target in Best Ball formats.

13.03: Evan Engram (TE – NYG)
It seems like we’ve been waiting for an eternity for an Engram breakout. Last season, Engram was selected on average in the sixth or seventh round of drafts, but now we get a palatable draft price in Round 13. The Giants are likely to add a pass-catcher in either free agency or the NFL Draft, but why not take a shot at Engram here? The Giants had one of the worst passing attacks in the NFL last season, ranking in the bottom quarter of the league in yards per pass attempt, points scored, pass attempts, and yards per play. Engram’s sixth-most air yards in 2020 and 22% target share still paint a rosy picture for potential if the offense improves in 2021. I’m still in on Engram.

14.10: Chuba Hubbard (RB – FA)
15.03: Terrace Marshall Jr. (WR – FA)
We get to the rookies. Hubbard was a monster at Oklahoma State, leading the nation in total yards from scrimmage (2,292) in the 2019 season. While his 2020 tape was solid, it didn’t compare to the previous season, and that likely factors into his 2021 draft stock being so down compared to other backs in this year’s draft class. Still, taking a flier on a rookie running back of this pedigree has virtually no risk at this juncture of the draft. It’ll look great if he lands in an advantageous spot.

Terrace Marshall Jr. splits the two defenders deep over the middle and makes a very nice catch while extending for the ball.

Not only showing off his speed, but also his soft hands and catch-radius. #TogetherBlue #NFLDraft pic.twitter.com/2Fr3TH41OM

Marshall may have been a bit overshadowed by his fellow receivers (the aforementioned Jefferson and Ja’Marr Chase) at LSU. Still, he has plenty of draft buzz coming his way, and rightfully so. He can’t even buy a legal drink in the United States (20 years, eight months), but he could be a back-end first-round wide receiver with his 6-foot-4 frame, speed, and physicality winning contested-catch situations. He could be the Tee Higgins of this class, so I’m on board with the final pick of my draft.

That concludes our mock draft exercise. Below, you’ll find the full draft board straight from FantasyPros Draft Wizard! 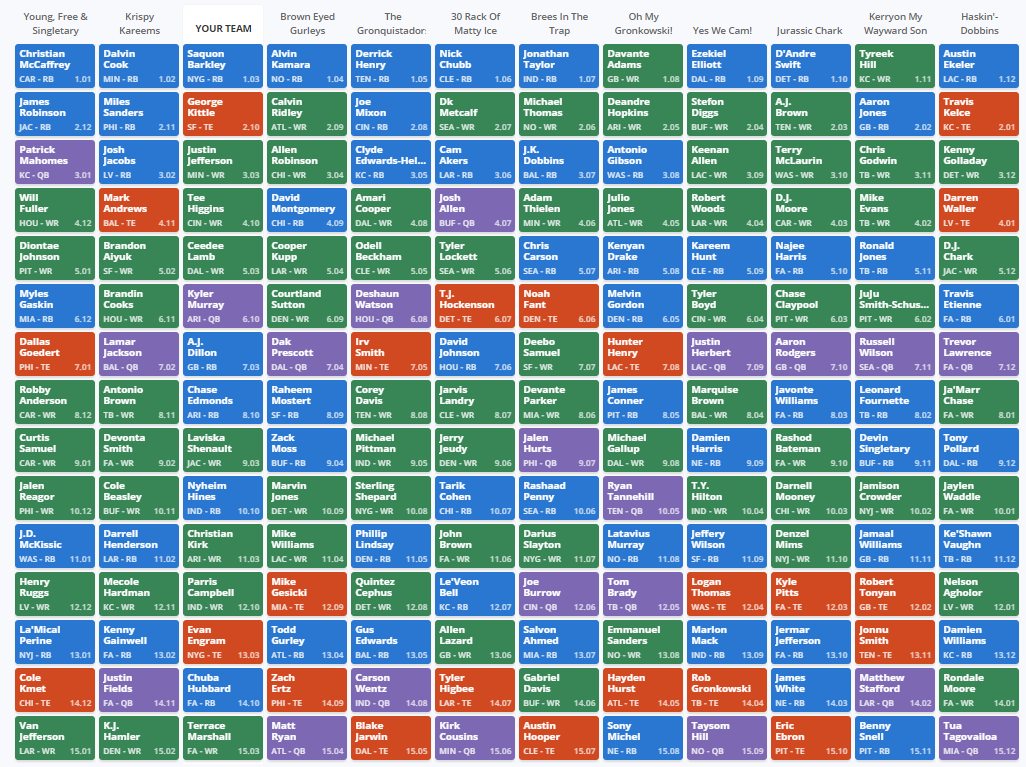 Subscribe: Apple Podcasts | Spotify | Google Podcasts | Stitcher | SoundCloud | iHeartRadio
Whether you’re new to fantasy football or a seasoned pro, our Fantasy Football 101: Strategy Tips & Advice page is for you. You can get started with Starting Your Own Fantasy Football League or head to more advanced strategy – like What is the Right Amount of Risk to Absorb on Draft Day? – to learn more.