What We Can Learn From 2019 Pitcher Projection Accuracy (Fantasy Baseball)

It is hard not to rely heavily on projections when building a fantasy baseball team. We wanted to be transparent and go back in time to check on how our FantasyPros Zeile projections actually performed last season.

We evaluated our projections in each hitting category in this post, and we found that some categories are simply easier to project than others. In this post, we will do the same for starting pitching. The commonly held knowledge is that pitching has a lot more variance than hitting, so it is harder to project every year. The main reason for this is the fact that pitchers much more commonly suffer long term injuries.

I’ll be using a lot of graphs in this, here is my data source. I filtered out all pitchers that were either projected for or actually threw less than 100 innings last year, so right away I am taking away a lot of the injured pitchers that we would have been obviously wrong on. Columns B-K are the actual 2019 stats, columns L-U are the projections, columns V-AE are the actual percentiles each pitcher had in each category, and columns AF-AO are the percentiles they were projected to finish it.

So how did it turn out? Let’s break down each category first.

This is naturally a very hard category to predict because it depends on so many things the pitcher cannot control. Here’s how it looked: 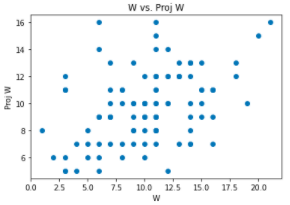 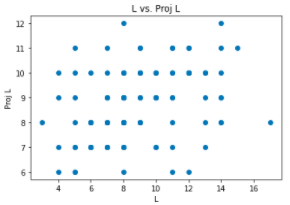 The x-axis is the actual numbers and the y-axis is our projection. Perfect projections would result in a straight line running from the bottom left to the top right of the graph. While we had some really terrible projections on wins, all in all, it was not completely miserable, as you do see those dots trending a bit linearly. As for losses, forget about it. Our projections really stunk at guessing loss totals.

ERA is a pretty random category as well, as a lot of it depends on luck and defense. Here is the plot: 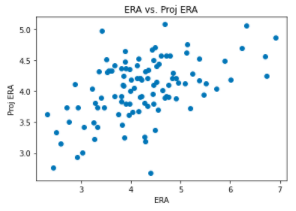 It went surprisingly well here, as we were mostly right on the best ERAs as you see a lot of dots concentrated in the lower-left corner of the graph there. Chris Sale really let us down, as we had him going for a 2.68 ERA to lead the league and he ended up posting a 4.40.

This category is a little bit more in the pitcher’s control, so we should see some good results here if we are going to call ourselves good at projecting: 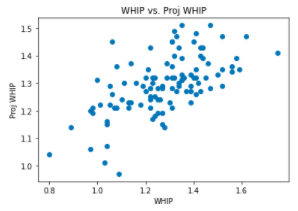 Not bad all. There are no dots in the bottom right of the graph, meaning that nobody we told you would have a very low WHIP did not do just that. We were generally right about the worst pitchers in this category as well.

These two should be our bread and butter, as these categories are the two that a pitcher has the most individual control over. Neither of these outcomes results in a ball being put in play, taking away a lot of the possible randomness. 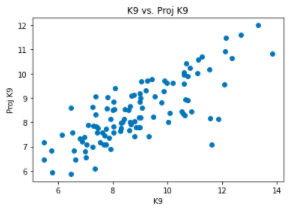 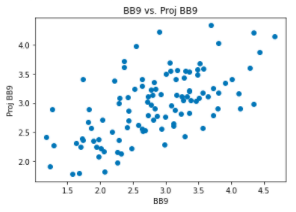 Sure enough, we did an excellent job at predicting strikeouts per nine and a pretty good with walks as well. The only guy that really evaded us in K/9 was Lucas Giolito, who we had down for a 7.1 K/9 rate; he went ahead and threw up an 11.6 last year – can’t win em all.

Giving up dingers is also largely within a pitcher’s control, but the juiced ball seemed to do us in here: 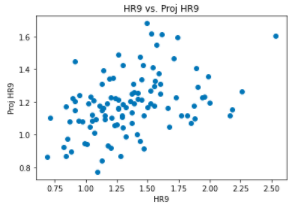 You can see our projections had most guys coming in under 1.4 home runs per nine, and we were very wrong about a lot of them. It was a crazy year for the long ball. We projected only 25 pitchers in this sample to give up more than 1.3 homers per nine, in reality, it was 56.

In order to compare our accuracies between categories, we have to normalize the data. I did this by taking percentiles first before comparing. This means that I looked at how we projected each pitcher would finish in each category relative to the rest of the league, and compared it to how they actually finished relative to the league. That way we have numbers between 0 and 1 for every category instead of all kinds of different numbers with wildly different ranges.

After doing that, we could take the error rates (how much we missed by for each pitcher) and average them out. Here are the results: 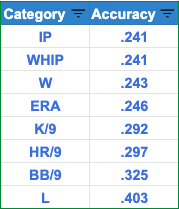 These results are pretty sad, as we were not very good at projecting anything. We missed by an average of 24% on a scale of 0-100% for our best category. If you read the hitting projections article, you can see how much better we were at projecting hitters than pitchers.

A lesson to take from this is that yes, pitching is much tougher to project – and it is not only because of injuries. There are fewer games for a pitcher, which results in a few bad starts really hurting his season line, and any little mechanical flaw or adjustment can drastically change a pitcher’s outcomes. Lots more room for error with a pitcher than a hitter.

This is ammunition for the fantasy baseball player who swears by loading up on hitting early in drafts and dealing with pitching later on, use it wisely.

Already drafted? Import your team to My Playbook for season-long advice >>