Ladies and gentlemen, we’re on the cusp of actual, real-life American football. In just a few short weeks, we’ll be heavily scrutinizing the Hall of Fame inductions, sorting through every play for the next great training camp and preseason star, and reading as much of what we can before that sweet paywall on several sites for “research.” That’s right. We’re almost there.

Since we’re almost there, it’s time to start getting a sense of how your fantasy football draft will go before you draft your squad. The perfect tool is right here at FantasyPros, as the FantasyPros Draft Wizard lets you draft teams repeatedly with so many personalized settings and things to tinker with.

For this mock draft exercise, the settings are:

After randomizing my landing spot, I have the 1.01 pick. Also, the draft board I’ll be referencing for this mock is at the bottom of the article.

The consensus 1.01 in all drafts except Superflex formats, of course. When healthy, his ability to catch passes and rush the football is unparalleled. Don’t overthink this one.

Look, we have the best running back in fantasy on our roster. Do we want to double-dip at the position? A total of 14 running backs (!) just went in the picks before our next two. Why reach for a running back like Chris Carson, who is very good, but a reach at 2.12, when we can shore up the wide receiver position? Maybe a tight end here? I’m going to grab the best available talent at wide receiver, and that’s easily Metcalf.

Head coach Pete Carroll brought in the former Rams’ passing game coordinator Shane Waldron into the fold to replace departed offensive coordinator Brian Schottenheimer. Waldron should bring some more complex route combinations and schemes, which should help Metcalf get open even more. While he could always win a one-on-one matchup with an opposing defender, he won’t have to do that as much if all goes to plan. All you need to know is: Metcalf is a freak of nature wide receiver entering his third season. He’s a steal at the end of the second round.

Jefferson cashed in one of the best rookie wide-receiver seasons in recent memory despite a condensed target share in Minnesota. The best part? He’s not overpriced in terms of ADP, as I snagged him at 2.06. While his extreme efficiency (70% catch rate, 1,400 receiving yards on just 125 targets) may come down, his volume could rise even more. He may be the next wide receiver star in this league and one you’d have to draft in the first round in the years to come. To me, Jefferson in the mid-second round is a discount. The beginning of the third round? It’s stealing. Take this bet on Jefferson, who could profile as the next NFL great wide receiver.

It might be slightly early here for Aiyuk, but when you’re at either side of the turn, you need to prioritize getting your guys a little bit ahead of their average draft position (ADP). I considered some running backs here like Miles Sanders and Mike Davis, but I feel like those two running backs fall into a glut with a host of others that we can go back to at our next two picks. Aiyuk is hardly settling at this pick; he showed that he’s a stud and can win at the NFL level after being pegged as a slot guy during the draft process last season.

Aiyuk was fantasy’s WR15 from Week 4 until the fantasy playoffs and brought numerous spike weeks into the equation for fantasy managers wise enough to hold and start him. He should get what we’d perceive to be a quarterback upgrade; the 49ers sure hope so! Going from Jimmy Garoppolo to Trey Lance could be the key to what unlocks the potential in the passing game, though it would have to be from an efficiency standpoint rather than volume.

Still, if this offense wants to run the ball, the passing game will be the benefactor, and if you’re looking for deep targets, Aiyuk is your man more so than any of the other options in this offense. Aiyuk has a wide range of outcomes, but splitting the difference merely gets you an even return on your late-fourth round selection. Anything more, and you’re playing with house money.

Hockenson is a volume play first and foremost. The Lions are going to be bad. Terrible. Atrocious. Every other synonym in the book for “bad.” BAD. They may score the lowest total touchdowns in the NFL this season. Still, even if Hockenson scores 4-6 touchdowns, the highest projection range has him at roughly 140 targets, and that’s not bad. If he catches 85-90 of those from Jared Goff (or whatever quarterback is navigating this skeleton crew), then we’re loving life as fantasy managers.

As long as Mostert is healthy, he’s fantastic. He just needs to take the job and keep it for the season. If Mostert does, he’s slam dunk RB2 for your team. However, if he leaves any doubt and leaves the door open a crack for Trey Sermon, this becomes a full-blown timeshare, and the “Shanahananigans” will take hold of the San Francisco backfield; nobody will know who to start in a given week. Mostert should be, at worst, a solid RB2 bet if in a timeshare as the 49ers will run the ball a ton.

Who fell asleep in this draft and let me grab Boyd at the end of the EIGHTH round? Boyd has the target lead for a high-volume Bengals passing game in his range of outcomes! While he’s the less exciting member of the receiver trio, including rookie Ja’Marr Chase and Tee Higgins, Boyd has been fantastic for fantasy managers and always seems to come at a bargain on draft day. So make him a priority in the later rounds because there aren’t a cheaper 120 targets in drafts than Boyd.

In one of the more fluid backfields going right now in the NFL and fantasy, Jones has the opportunity to capture a lot of value relative to where we selected him here. Yes, Leonard Fournette exists, and so does Giovani Bernard, but there are ranges of outcomes where Jones can be the lead dog as he was for the majority of 2020. Jones is the best runner on this team, so he should have every shot to return value for your fantasy roster, and as the RB3 on this team, we didn’t pay a hefty price.

My man “Moondog,” Mooney came close to notching a 100 target season, ending with 98 in his rookie campaign. However, he got open a ton and, on one impressive Monday Night Football showing against the Rams, completely embarrassed all-world cornerback Jalen Ramsey. Can we get fantasy points for that? It’s just a shame neither Nick Foles nor Mitch Trubisky could get him the ball consistently. Enter Andy Dalton and (hopefully sooner rather than later) Justin Fields, who should immediately unlock this offense even more for the secondary and tertiary pieces of this offense. Mooney is a clone of Tyler Lockett, and if we can get anything close to that type of value at the end of the tenth round, then this pick is a steal.

Here’s the thing: D’Andre Swift averaged 13.2 opportunities per game last season, and Detroit still went out and signed Williams to a two-year deal. They then released Kerryon Johnson. With so many opportunities there for the taking in Detroit, it’s looking like a split backfield if you read the tea leaves. Much more so than anybody (especially those in dynasty formats that roster Swift) would like to admit.

Williams has always been extraordinarily steady and productive in his role with Green Bay and looks to do the same in Detroit. Williams finished as an RB3 or better in 69% of his career games in PPR formats, including 11 RB1 finishes. If you can get the cheapest option in what has become more of an ambiguous backfield in the 11th round with that kind of production, you almost HAVE to select him.

In these rounds, you’re looking for either high-upside contributors or veteran values, and Brown constitutes a mix of both. Brown comes over from Buffalo, and right now, you can make the case that he’s the second target in this offense behind Darren Waller. The Raiders did not draft any other receivers, so between Brown, slot man Hunter Renfrow, and second-year receiver Henry Ruggs, Brown has the ideal path to consistent work and upside. The volume may not be there like it was two years ago when he was the WR1 in Buffalo, but at this stage of the draft, Brown is a steal.

To round out the draft, we draft a could of veteran “utility” running backs in the target maven McKissic and somebody who could be a thorn in the side of last season’s league-winner David Montgomery in Williams. McKissic may not have over 100 targets like he did last season, but there’s no reason why he can’t get 65-70 and be a darling in half-PPR and PPR formats for another season in Washington.

As for Williams, he could be very annoying for those who roster David Montgomery. Williams took the 2020 season off because of COVID-19, so he’s running with fresh legs, something backfield-mate Tarik Cohen is not. Cohen is still hobbled from his ACL injury and could very well end up on the Physically Unable to Perform (PUP) list to start the 2021 campaign. If that’s the case, Williams should get a lot of work in Cohen’s stead and potentially vulture some touchdowns too. 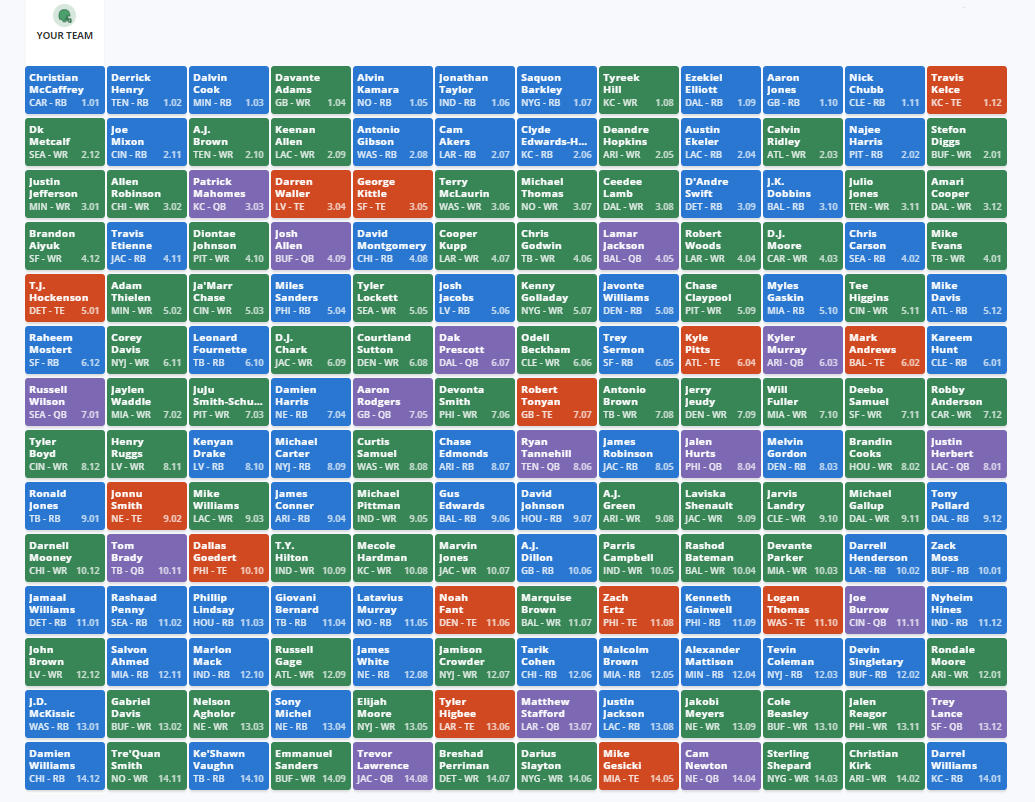