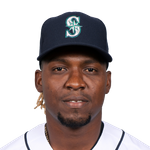 Montero wound up closing for the Rangers and totaling eight saves in 2020, but it wasn't a particularly special season. His hard-hit rate and walk-rate increased from his strong 2019 season, and he totaled a 4.08 ERA. Now with Seattle, Montero's best asset may be his lack of competition for the closer's role, as Seattle has struggled for several seasons to find a reliable ninth-inning option. Draft Montero as a mid-tier closer, who you're taking more for his job security than his spectacular numbers.