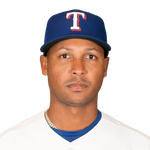 Leclerc is dealing with elbow soreness and is now expected to miss "extended time." It's just another in the long list of things that has derailed Leclerc's career of late, after he looked like he would be the Rangers' closer for years to come after he emerged from obscurity in 2018 to become a dominant reliever and then signed a lengthy deal. After is stellar season, his walk-rate reverted to its pre-2018 numbers quickly, he lost the closer's role, and then missed almost all of last year with a shoulder injury that required surgery. With the elbow soreness, there's just no reason to draft him this year, and you can pick him up off the waiver wire when and if he returns and is named the closer.