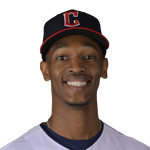 McKenzie had a very successful major league debut last year, pitching to a 3.24 ERA, a 0.90 WHIP, and a 33.1% strikeout rate. His talent isn't in question at this point, but his health certainly is. McKenzie has a very slight build and has missed time with injury in his minor league career, including all of the 2019 season. Even if he stays healthy all year, Cleveland is likely to put a hard cap on his innings. There's a reward, but there's plenty of risk to go with it. Draft him for the back end of your rotation and hope he gets to 140 innings.