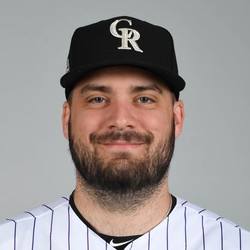 Harrison Musgrave was called in to relieve Tyler Anderson after he was blown up for nine earned runs in the 12-1 loss. He allowed four hits, three earned runs, one walk and struck out one.

Tough times for the Rockies pitchers in this duel. Musgrave didn't fair much better after his starter was pulled as he served up two home runs as well. Hopefully he'll have better luck in Atlanta.