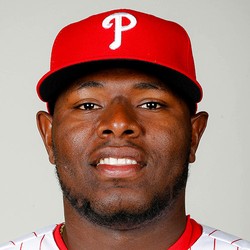 Neris rebounded from a spotty 2018 to become an incredibly reliable reliever last year and tally 28 saves for the Phillies. His stuff isn't overpowering and his control is mediocre, but his split-finger is elite and he leaned into it more than ever. The resulting increase in ground balls helped stabilize Neris' numbers last year and should again make him a reliable, if unexciting, option in the bullpen in 2020.

The Phillies and closer Hector Neris avoided arbitration by reaching an agreement on a one-year $4.6 million deal. The contract includes a $7 million option for 2021.

Neris has one more year of arbitration eligibility remaining, and he'll enter the season as the team's closer. He was useful for fantasy purposes last year despite the carosel at the closer position in Philadelphia. Neris is considered the RP13 by our current expert consensus rankings.