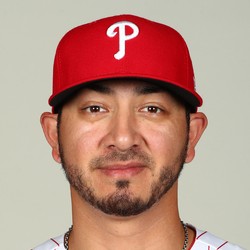 Phillies pitcher Vince Velasquez allowed three earned runs on two his and three walks while striking out three in Sunday's loss to the Toronto Blue Jays.

Velasquez has a 4.70 ERA this Spring after pitching to a 4.91 ERA last season. He has the inside track on a spot in the Philadelphia starting rotation, but that has more to do with their lack of internal options than his recent performance.