Hybrid star, Isaiah Simmons has declared for the 2020 NFL Draft

With the NCAA National Championship now complete, underclassmen have begun declaring whether or not they will enter April’s draft or return to school for another year. There have been some surprises like Travis Etienne and Devonta Smith deciding to stay at Clemson and Alabama respectively, but most of the likely first round picks have already announced that they’ll be among one of the best draft classes in recent history. Today, I’ll sort my top 100 into tiers and tell you about a few who stand out along the way. I built my big board (and screenshotted it) on The Draft Network where they also have a user-friendly mock draft simulator for you to check out! Although Joe Burrow will almost certainly be the #1 overall pick, he is by no means a can’t miss prospect. Yes, he is polished and just put up the greatest statistical quarterback season in NCAA history, but as you’ve surely heard before, he is older than Lamar Jackson. He should come into the NFL as a starter from Week 1 but the ceiling may not be as high as someone like Tua Tagovaliloa or even Jordan Love. Rather, we are likely looking at another strong, but unspectacular QB like Matt Ryan or Matthew Stafford. Chase Young, meanwhile, appears to be an even better prospect at this stage in his development than even Nick Bosa was this time last year. Virtually everyone agrees that the players I listed in my top seven are worthy of high first round picks but this tier is where everything gets messy. You’ll see some boards with Mekhi Becton, Grant Delpit, Tee Higgins and Jedrick Willis in the 20s or perhaps even the second round, while others see Tua or Derrick Brown as top five overall picks. Among the players listed above, I am surely most passionate about my Becton ranking. This 6’7″ 370 pound athletic freak of nature was blessed with a Hall-of-Fame body. He needs some refinement, of course, but his instincts and raw power are both off the charts. Much like the tier above this one, there are some names who will jump off the page if you are familiar with the 2020 draft class. Justin Herbert, for instance, is commonly regarded as a top 12 pick but I’m not nearly as fond. In fact, I like three-year starter, Jake Fromm even more. Sure, Herbert’s raw skill-set is stronger, but Fromm more consistently makes the big throws and has a natural poise in the pocket that is rare to see in a college kid. My favorite among this year, though, is former 5-star wide receiver prospect, Donovan Peoples-Jones. His highlights are on par with Jerry Jeudy and CeeDee Lamb, I kid you not, but the scheme in Michigan was not a fit so his abilities have fallen under the radar. No, it isn’t that I’m convinced this running back class is trash. Clearly, D’Andre Swift, Jonathan Taylor and J.K. Dobbins all have a shot at being taken in the first round and the talent matches that assessment. Rather, this is just an incredibly deep class with 44 names that I’d typically give a first round grade to. Yes, Jalen Hurts is among that pack, as he combines remarkable accuracy with his threat on the ground. Don’t be surprised if an organization like the Patriots or Saints grab him in the late first to develop behind Tom Brady or Drew Brees. 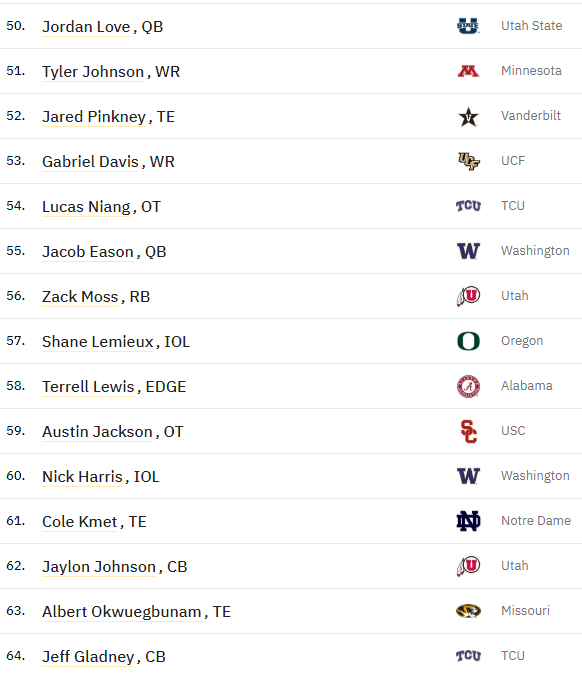 There is a lot of upside in this tier of 15 players, ranging from a potential dual-threat star like Jordan Love to serious sleeper wideouts like Tyler Johnson and Gabriel Davis. Were this another draft class, any of those three could slide into the first round if a team fell in love with that potential. As it is now, though, no one in this tier has a shot at the first round with the exception of Jacob Eason and Terrell Lewis. Among the whole group, Albert Okwuegbunam may be the most intriguing prospect. He was expected to be in the top 10 conversation coming into the year, but he took too many plays off and looks like an entirely different player. If an NFL team can get him to focus, we could be looking at a perennial star. Thanks for reading and make sure to keep an eye on the FantasyPros Football Podcast (below) for all kinds of off-season content including loads of 2020 NFL Draft talk.