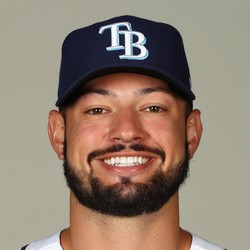 To make room on the active roster to the recently activated Rhys Hoskins, outfielder Dylan Cozens has been placed on the 10-day DL with a left quadriceps strain, the Phillies announced Saturday.

With Hoskins returning, Cozens was likely headed back down to the minor leagues for regular at-bats anyway. In his brief stint in the big leagues, Cozens went 2-for-9 with a home run, two RBIs, and two walks.

An update on his status should be available Saturday, but consider Cozens day-to-day for now. The fact that there has not been any real update since the game ended would seem to indicate that the injury is not severe, but Cozens is likely headed back to the minors on Saturday anyway with Rhys Hoskins expected back from the disabled list.

Dylan Cozens went 1-for-2 with a two-run home run in Wednesday's loss to the Chicago Cubs. The home run was the first of his career and came after he replaced Nick Williams, who left the game with a wrist injury.

Cozens was called up to take the roster spot of the injured Rhys Hoskins, and with the latter expected back as early as this weekend, he could be headed back to the minors soon. Still, Cozens has displayed excellent raw power in the minor leagues and displayed on Wednesday that it might just translate to the big leagues, as well.

Dylan Cozens made his major league debut Friday night against the Giants. He got a single on the first swing of his bat. He then went on to strike out his next two at-bats.

Cozens will probably be up temporarily for the injured Rhys Hoskins. Deeper leagues might want to take a flyer on him, but don't expect a long-term commitment from the Phillies just yet.

Kevin McGuire - Fantasy McGurk2 years ago
Who Should I Draft?
Do Not Sell
Are you looking to contact Customer Support about a subscription or account related question?
Yes
No, I'm a California resident looking for the California Consumer Privacy Act form