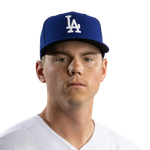 Smith had an outstanding 2020 season, walking a ton, striking out little, and getting on base at higher than a .400 clip. The power he showed in his 54-game stretch in 2019 remained, and he ranked in the top 10% of the league in wOBA, expected wOBA, and expected slugging percentage. Given how the Dodgers play the entire season with an eye toward the playoffs, as well as the presence of Keibert Ruiz, it's possible that Smith may get more rest than other catchers this year. But that's a minor point against someone who should be one of the top options at his position. He's no worse than a top-five catcher, and there's a good argument that he should be the second player selected at his position.