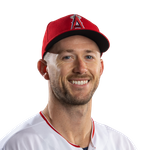 It's mostly about health with Canning, who offers a great deal of stability when he's on the mound. You can expect at worst a low 4.00 ERA, about a 1.30 WHIP, and roughly a strikeout per inning. But he did close last season notably strong, pitching to a 3.14 ERA, and a 1.19 WHIP, with a 14.5% swinging strike rate and a 10.4 K/9 mark over his final five starts. That's probably his ceiling, but it shows what he's capable of when he is healthy and gets into a groove. He's a fine pick at his cost (which is minimal), but bake in some injury risk.