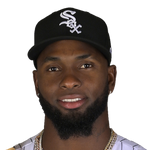 Robert's production was pretty much what it was cracked up to be in terms of his power and speed, but his .233 batting average was a little hard to stomach. He struck out way too much (32.2% of the time, bottom 6% of the league), and just didn't make hard enough contact consistently to keep his average above water. But Robert will be just 24 years old this season, so there's plenty of room for growth in that area. That's particularly true given that Robert was a career .312 hitter in the minors and .314 in Cuba. Even if he was a batting average drain, which you shouldn't expect, given that he was on a roughly 30-25 full-season pace last year, fantasy managers should be able to stomach it. Draft him as a borderline first outfielder in fantasy leagues and reap the rewards.