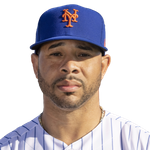 Pham had a terrible 2020 season, during which he slashed .211/.312/.312 and hit just three home runs. A broken hamate bone limited him to just 31 games, and to make matters worse, he was stabbed in the lower back during an altercation in the offseason. But even entering his age-33 season, there are reasons to be optimistic about his 2021 outlook. Pham had averaged roughly 22 home runs and 22 steals with a .284 batting average the three years prior to last, and he had the highest hard-hit rate of his career in 2020. Indeed, his expected batting average of .266 was 55 points higher than his actual average. There's reason to expect Pham to return to his 20-20 ways if he can remain healthy, and batting in a loaded Padres lineup, he should add plenty of counting stats.