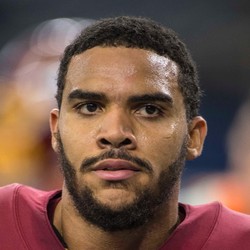 This is the first team that has been tied to Reed, who was recently released by Washington. Reed continues to show a high ceiling, but his consistency has been non-existent, largely due to injuries. Given the nature of his head injuries, it's hard to count on Reed for much when it comes to fantasy football, but he could also certainly still deliver, at least while healthy, in the right scenario.

Blaine Blontz14 weeks ago
Jordan Reed released by the Redskins

Jordan Reed was released by the Redskins on Thursday.

Reed missed the entire 2019 campaign due to a concussion he suffered back in the preseason. The move will save the Redskins $8.5 million. Reed just cleared concussion protocol last week and still wants to continue his NFL career. The 29-year old has a lengthy injury history and will look to latch onto another team.

Jordan Reed has cleared concussion protocol, and he will reportedly aim to continue his playing career after his expected release from Washington.

Reed has been extremely frustrating to own for fantasy purposes given his injury issues and the upside that he has flashed. His concussion issues will likely continue to limit his fantasy value moving forward, but he could produce in the right landing spot. He'll be an interesting player to monitor this offseason in what's become a shallow pool of fantasy-relevant tight ends.

Reed ended the season on injured reserve due to the head injury suffered in 2019. It's unclear when he'll be deemed healthy enough to return, and given the league's attention on head injuries, he's going to be a volatile asset for fantasy purposes moving forward, even more so than before. While his talent and upside have rarely been questioned, he's struggled to remain on the field due to a bevy of health issues.

Adam Schefter is reporting that the Washington Redskins have placed TE Jordan Reed on injured reserve.

Reed had yet to play a game this season after suffering a concussion in a preseason game. This is troubling news given his injury history and may actually put his career in jeopardy. With TE Vernon Davis (concussion) also ruled out for Week 6, Jeremy Sprinkle will continue to fill in the spot for Washington. Even in a weakening TE market, fantasy owners should look elsewhere.

Deposit $10 at a DFS partner site you have NOT played at and get a FREE 6 Month HOF Subscription!
Claim Offer
Who Should I Draft?
Most Accurate Experts
for Jordan Reed
Consensus Rankings
View All Rankings
Do Not Sell
Are you looking to contact Customer Support about a subscription or account related question?
Yes
No, I'm a California resident looking for the California Consumer Privacy Act form