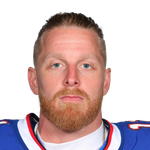 It's odd, but the trade for Stefon Diggs doesn't really affect Beasley's role at all. He's the slot receiver in the offense when they go three-wide, and he's the safety valve for Josh Allen. With that being said, many more plays will be designed to the perimeter in order to get the ball into Digg's hands. That will cap the number of targets Beasley sees, which was at a tremendous 104 last year. Even without Diggs on the roster last year, Beasley produced just two games with more than 14.3 half PPR points, so it's not like you were winning weeks because of him. He was a fine streamer during bye weeks as someone who wouldn't crush your lineup. Lowering expectations to around 80-85 targets, Beasley's floor has been lowered and there will be better options to choose during bye weeks in 2020.