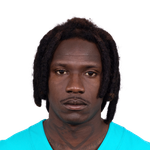 Did you know that Williams was the No. 39 wide receiver through nine weeks last year? That was despite them having their bye in Week 5, as well as him not being a true starter until Week 3. He was extremely good his rookie year. He's coming off a torn ACL, which isn't an injury that's as detrimental as it used to be, but it may be tough for him to return as the same player in a brand-new offense. The Dolphins defense improved greatly, their run game should be much better, and they'll eventually transition to a rookie quarterback. These are all question marks, but fortunately, Williams is being drafted outside the top 60 wide receivers, similar to the way DeVante Parker was last year. Given their current prices (Williams WR61, Parker WR22), Williams seems like a much better value than Parker this year. Knowing that Allen Hurns and Albert Wilson have opted out, there are plenty of targets up for grabs, making Williams a solid WR4/5 on fantasy teams that you can spot-start depending on matchups.