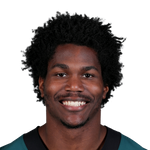 Poor Johnson cannot catch a break. After battling injuries throughout his young career, the Lions drafted D'Andre Swift this offseason, which put Johnson as only borderline relevant in fantasy circles. With Swift battling injury as the Lions approached the season, however, it looked like Johnson would at least have an impact role early in the year, with the chance to carve out a larger role even when Swift was healthy. But now, with the Lions signing Adrian Peterson, Johnson again has impediments to fantasy-relevance. Johnson is talented and could succeed in the right situation, but given all the roadblocks in front of him, he's best left as a bench stash in deeper leagues.