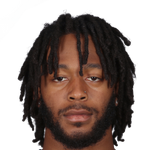 With Julian Edelman out of New England, we might see Meyers be the receiver to step into that role, though the lack of clarity with the quarterback situation is what will supress our optimism. In an expanded role with Edelman out last year, Meyers totaled 45-plus yards in 9-of-11 games, including two games with 110-plus yards. He didn't score a single touchdown, which is part of the reason he's not getting any love. What if I told you he finished with just one fewer catch and 19 fewer yards than Brandon Aiyuk last year? The concern is the addition of Nelson Agholor and Kendrick Bourne, who both signed lucrative deals. Meyers is worth a late-round pick in case he is the top receiver in New England.