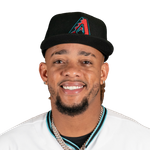 Most fantasy managers expected regression from Marte after his breakout 2019 season, but few saw last year coming. Marte hit two homeruns in his 45 games, and contributed minimally elsewhere other than batting average. His walk rate dropped to a miniscule 3.6%, and although he struck out less than ever, the quality of his contact was overwhelmingly poor. Truth be told, both 2019 and 2020 are probably outliers for Marte, and the truth probably lies somewhere between his 2018 (.260/.332/.437) and 2019 (.329/.389/.592) seasons. Those numbers will play at second base, especially given Marte's draft cost, but give up dreams of him hitting 32 home runs ever again.