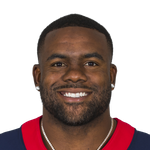 Leaving the nest of the Saints' offense is something Ingram has never had to do, so life may seem a bit more difficult in Baltimore. It's a good thing that they'll be a run-first team with Lamar Jackson under center, but it's also a bad thing around the goal-line, as Jackson is more of a threat to score than Ingram. The Ravens drafted Justice Hill, and still have Kenneth Dixon and Gus Edwards on the roster, so it may be more of a timeshare than some believe, though Ingram should be the leader in the clubhouse. His lack of upside drops him below some of the other options in his range