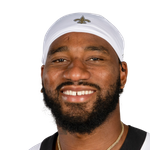 Smith has always felt like an explosion waiting to happen, as evidenced by his 10 touchdowns on just 46 receptions the last two seasons. He may have been a trendy breakout pick with Ted Ginn Jr. gone, but the Saints added Emmanuel Sanders, all but ending Smith's realistic chance for fantasy relevancy. In deeper leagues, he's worth a flier in case Michael Thomas or Sanders sustain injuries. But in standard-sized leagues, there's no reason to bother drafting him.