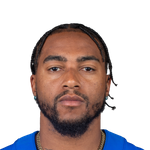 We saw exactly one game with Jackson healthy in the Doug Pederson offense. It led to nine targets, eight receptions, 154 yards, and two touchdowns. To be fair, it was against Washington, but still impressive. It's tough to take too much away from just one game, though. He is now 34 years old, so it's only a matter of time before his game declines, though we haven't seen it yet. He's averaged at least 10.0 yards per target in six of his last seven seasons. With Marquise Goodwin opting out for the season, they'll need Jackson in the field-stretching role. He's a poor man's version of Will Fuller at this stage of his career but can still fit in your lineup from time to time. At his current WR58 draft position, he's a steal.