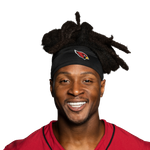 Did you know Hopkins hasn't seen less than 150 targets since way back in 2014? Now going to a Cardinals team with Christian Kirk and Larry Fitzgerald, it's unlikely he reaches that mark. The odd offseason also hasn't given him a lot of time with new quarterback Kyler Murray. From reports, the first time the duo got together was at the end of June. Is that enough time to develop any sort of chemistry? Hopkins has played with a lot of bad quarterbacks in his time, though the only one who held him back from producing was Brock Osweiler, as Hopkins finished as the No. 29 wide receiver in 2016 despite seeing 151 targets. Murray's rookie season wasn't particularly efficient (both Fitzgerald and Kirk saw over 105 targets but outside the top-36 wide receivers), but we should expect growth in year two. There is a scenario where Hopkins is a rock-solid player but not a top-five fantasy receiver, however, given his history of producing with guys like Tom Savage, TJ Yates, and Brian Hoyer, I'm giving him the benefit of the doubt. Still, his targets will take a hit, making him a second-round pick rather than the first-round one he's been.