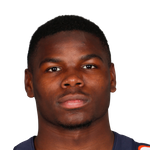 Cohen had a down year last season (like most others in the Chicago offense), but it was largely just his lack of big plays. He's a lock for at least 70 catches, which makes him someone you can start as a Flex play in half- and full-PPR leagues. He's not going to cut into David Montgomery's carries very much, but with Montgomery potentially missing the first game or two with a groin injury, Cohen could get additional work early. Either way, as he often does, he's likely to outperform his average draft position.