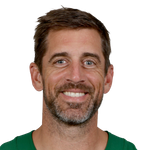 Going into Minnesota to play hasn't been a treat for quarterbacks over the last few years. Over the 16 games played there the last two years, they've allowed 331-of-515 passing (64.2 percent) for 3,335 yards (6.48 YPA), 12 touchdowns, and 13 interceptions. Rodgers himself has played there twice and combined for 414 yards, one touchdown, one interception, and 18.22 fantasy points. Again, that's over two full games. Here's the wrinkle, though: The Vikings aren't the same defense, as they lost five starters on that side of the ball, including defensive tackle Linval Joseph and edge rusher Everson Griffin. They also replaced all three of their starters at cornerback, as Xavier Rhodes, Trae Waynes, and Mackensie Alexander are gone. They did recently trade for Yannick Ngakoue, which will help, but this is where the public perception may be able to be used to your advantage in DFS. On top of that, the Vikings will be without top pass-rusher Danielle Hunter, who was placed on IR earlier this week. Not many follow all the additions/subtractions throughout the offseason, but with all the moves on the defensive side of the ball, Rodgers may be able to exploit some miscommunication. This game is taking place in a dome, so weather won't play any role in that, and Rodgers has a 70-15 touchdown to interception ratio indoors with a quarterback rating of more than 106.0. Given Rodgers' struggles against Mike Zimmer's scheme, there are some concerns for season-long leagues, so treat him as a middling QB2 in those formats. He's a sneaky tournament play in DFS, though I wouldn't touch him in cash.