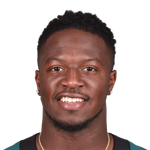 It seems the Dolphins are happy with the duo they've assembled this offseason, though not many are talking about the biggest variable they'll be dealing with. They Dolphins have replaced every member on the offensive line (which really isn't a bad thing considering who was there last year), including three rookies. Knowing they have zero game experience together, it's likely to be an issue. Howard isn't someone who's super elusive, but rather relies on his blocks being set up and hitting the hole. The Patriots allowed just four running backs to finish as top-24 options last year, though the biggest reason was due to them allowing just one running back touchdown the entire season. The Patriots defense has lost interior lineman Danny Shelton, edge rusher Kyle Van Noy, linebackers Jamie Collins and Elandon Roberts in free agency, and then had linebacker Dont'a Hightower and safety Patrick Chung opt out for the season. So, it's fair to say they won't be the same elite unit. They did allow a stable 4.06 yards per carry with those players, so it's not a flat-out zero for Howard, but I'm more worried about his offensive line and lack of scoring opportunities. I wouldn't rely on him for anything more than RB3/4 production.