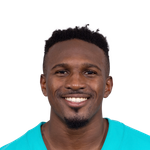 Edmonds enters the season in a familiar spot - as a fairly decent handcuff who could have enormous value (such as in Week 7 against the Giants last year) if the starter gets injured. Absent an injury to Kenyan Drake, Edmonds should see only a handful of touches per game and provide little fantasy value. If Drake does get injured, however, Edmonds has the chance to excel, given the Cardinals' addition of DeAndre Hopkins likely opening up running lanes, along with another year of growth from Kyler Murray. He's worth drafting as a handcuff in deeper formats.