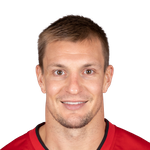 At his peak, Gronkowski was likely the greatest tight end of all time. But after a year off, fantasy manager can't expect him to simply return to his peak self, especially since he hasn't played a full season in nearly a decade. With his immense talent and back with Tom Brady, Gronkowski should still be drafted a TE1, but don't expect a full season of health or a return of the Gronk of old.