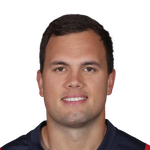 Henry dealt with an injury yet again last season, but he was productive when he was able to play. Playing 12 games, he had the most targets, receptions, and yardage of his career. The departure of Philip Rivers, however, will likely do no favors for Henry, as the veteran quarterback historically targeted his tight ends heavily. Although Tyrod Taylor targeted Charles Clay often in Buffalo, he's almost certainly going to throw the ball less than Rivers did, meaning Henry is likely to see a dip in targets. He should still be valued as a TE1, but his stock has dimmed a bit with the change in quarterback.